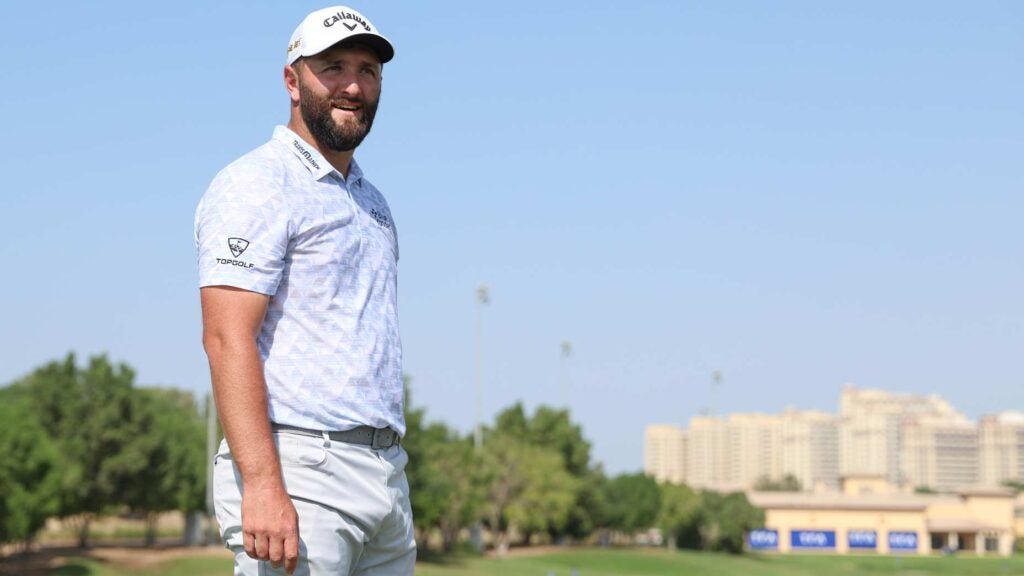 Jon Rahm played a good round of golf on Friday. His six-under 66 at Jumeirah Golf Estates moved him to eight under for the week and into T5 at the halfway point of the DP World Tour Championship.

Rahm plays a lot of good rounds of golf. In 2021 his good rounds were better and more plentiful than anyone else in the world; he claimed his first major, charged to World No. 1 and opened a gap between his game and the rest of the pros on Tour. This year those rounds haven’t come quite as often. He has slipped all the way to (gasp!) World No. 5. But if this is a slump, well, you could do a whole lot worse. Rahm knows that.

After signing his scorecard, Rahm summed up the day to reporters — “It was a really good round of golf. I was really comfortable all day,” he said — and then was asked to assess his season as a whole. That’s where he let it rip.

“Well, I got pretty tired of hearing, ‘you’re having an off-year,’” Rahm said. “Maybe the standard I’ve set has gotten you guys used to seeing me win more often, or at least having the chance to win more often.”

He’s right. Rahm’s standard has given us high expectations. And his high-profile wins last season elevated those expectations even further. This year, Rahm won the Mexico Open in May and the Spanish Open in October. He finished second at the Sentry Tournament of Champions, T3 at the Farmers, logged top-10s at the WM Phoenix Open, WGC-Match Play, Memorial and two playoff events. In three starts since the end of the Tour season Rahm finished T2 at the BMW PGA, won the Spanish Open and finished T4 at the CJ Cup. And this week is off to a promising start, too: 70-66 and distinctly in the hunt. In other words, Rahm’s game seems just fine, thanks.

But as Rahm kept talking he reminded reporters that nobody has higher expectations for Jon Rahm than Jon Rahm. So while he may be tired of other people saying he’s had an off-year, he’s not afraid to say so himself. Plus, as someone who grew up admiring Tiger Woods, Rahm knows that for a season to be truly successful, a player of his caliber has to contend and win the biggest events of the season: the majors.

“It wasn’t a bad year, two wins and a lot of top 10s,” he pointed out. “The one thing I think that would have made it better, for myself at least, would have been having a chance at majors. U.S. Open I was there, but for the other three I was nonexistent. To be there on Sunday, at least having the chance would have made it a little better.”

This has also been a year of change and of balance. Rahm reminded reporters that the past couple seasons have included plenty of adjustments in his personal life, as he and his wife Kelley have welcomed two sons into the world. Keppa was born in April 2021 and Eneko was born in August.

“I’m not making an excuse here, but you’ve got to think, new parents, moved to a new house, got pregnant with our second, a lot of changes going on in the household and my lifestyle, just trying to get used to it,” he said. “Went from zero kids to two kids in 15 months. That’s quite a bit of a change.”

Rahm expanded on how that change, specifically his role as a father, has impacted his golf game and his practice schedule.

“Right now I think it’s a blessing because he doesn’t care at all what goes on,” he said. “It doesn’t matter. When he sees me, I’m dad and he just wants to play and it’s very, very refreshing.

“At home, I’ve come to enjoy those routines. I’m an early riser and so is he. So when I’m home, Mom gets to sleep a little bit more. If he wakes up early, I get him out of bed and we have a good solid hour and a half, two hours of father and son time that I don’t usually get. When I’m done practicing in the afternoons, no matter how tired you are, when your son comes to you and looks at you like this, everything goes away.

“It’s helped me separate golf and personal life even more. So obviously I know what’s important. It puts things in perspective but it really has separate those aspects of life, and even tournaments. Sunday at the U.S. Open, horrific finish; my son is there, instantly goes away, right?”

In summary, Rahm said, 2022 has been a year of growth. That’s been evident throughout a turbulent year in the professional world, where Rahm has found his game as well as his voice.

“I think it’s been a year where I’ve grown a lot and matured a lot with myself. Hopefully it’s a segue for good years.”

Two more rounds and it could finish on a high note, too.

Dylan Dethier is a senior writer for GOLF Magazine/GOLF.com. The Williamstown, Mass. native joined GOLF in 2017 after two years scuffling on the mini-tours. Dethier is a graduate of Williams College, where he majored in English, and he’s the author of 18 in America, which details the year he spent as an 18-year-old living from his car and playing a round of golf in every state.