Jordan Spieth was just disqualified … from a pro-am? 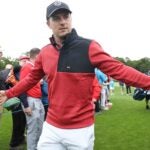 Jordan Spieth was disqualified from the JP McManus Pro-Am after mistakenly picking up his ball before holing out.

Jordan Spieth found himself in a bizarre situation during the first round of the JP McManus Pro-Am.

On the 14th green, the three-time major champ scooped up his ball before holing out because his score would not count for the team portion. However, Spieth neglected the fact that this high-profile pro-am also features an individual leaderboard for professionals. Since Spieth did not finish out the hole, he was disqualified from the individual portion of the event.

The DP World Tour noted the DQ on their official leaderboard, and the Twitter account Spieth Legion reported the incident as well.

Despite being eliminated from the individual portion of the event, Spieth continued to play alongside his amateur teammates for the remainder of the round. He was three-over par when the incident occurred.

Xander Schauffele leads after 18 holes at Adare Manor, carding an opening-round 64, while Rickie Fowler sits in second at five under.

Tiger Woods, who is playing competitively for the first time since the PGA Championship, fired a five-over 77.