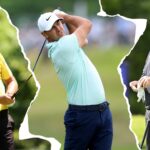 Webb Simpson, Brooks Koepka and Shane Lowry are all playing different tournaments this weekend, despite all being ranked in the top 60 in the world.

Unsure of what to watch this weekend? Me too!

There’s that LIV thing everyone is talking about, kicking off in Portland with Brooks and Bryson and Phil and DJ. There’s the John Deere Classic, with its weakest field in two decades, but a Masters berth on the line. Then there’s the Irish Open, six time zones away, with three spots in the Open Championship up for grabs.

Of course, you can watch all three, if there are 25 hours in your day. But do you even want to? What does a victory at any of these events really mean, especially while the others are happening elsewhere, on different styles of grass, against different levels of competition?

After months of announcements, press releases and jesting letters, we’ve finally arrived at a weekend that affirms the need for true world tour: three tournaments, all happening at once, all meaning different things, all run by different organizations. The sum of it all seems perilously less than the individual parts.

Among the good things: Rory McIlroy sees a path.

“I’ve always advocated for something where the tours work more closely together where we create some sort of world tour model,” McIlroy said last week in Connecticut. “Or ATP model (Association of Tennis Professionals), where there’s different events going on in different areas of the world but they’re all governed under one umbrella.”

It’s an intriguing idea, and feels extra meaningful when lobbied by perhaps the most important golfer on the planet. In tennis there are the ultra important major championships, with a slew of layers beneath that are vital to the die-hard fan. Moving downward from the majors, each layer has more events and less value. Play well in ATP 500 events, you’re bound to play in the ATP 1000 events, which are bigger and better. Sounds a lot like golf: play well in the fall, you’re bound to earn a spot in the Arnold Palmer Invitational.

The ATP Tour that McIlory referenced thrives off connective tissue between its levels; tissue that is obvious, and easy to understand. The names of those levels — ATP 1000, ATP 500, ATP 250 — simply refer to the number of world ranking points allotted to the winners. It’s the equivalent of the PGA Tour’s new structure, with the eight “elevated” events proposed by Jay Monahan last week, which tower over the value of events like this week’s John Deere Classic. But it’s weeks like this where McIlroy’s tennis tour comparison drops off. In tennis there is no DP World Tour equivalent, which takes on greater importance in July and the fall. And there is no LIV Golf equivalent, which is buying relevancy at a pace no one could have imagined.

One can imagine McIlroy watching a lot of Wimbledon these next two weeks as he takes a break before St. Andrews. He might catch the story of Maxime Cressy, who is playing Wimbledon for the first time after crossing the qualification threshold back in January, when he advanced to the finals of the Melbourne Summer Set, an ATP 250 event. It was one of two ATP 250 events that week, and high finishes like that have earned him placement in ATP 500 and 1000 events since. From afar, it isn’t always clear which event is most important, but the value retained at each is obvious. In golf, we have little clue. The winner of this week’s Irish Open, the best field in the world, holds little direct meaning for entry to the PGA Tour. Clearly, the connective tissues need to get stronger.

And they will get stronger, as evidenced by further investment announced this week between the PGA Tour and the DP World Tour. It just won’t happen at the same erratic pace LIV Golf is moving at, which is why feelings are hurt and a legit competition has grown. Would it have helped Jay Monahan to take a meeting with Saudi Golf at some point in the last three years? Probably. They’ve forced his hand, even if nothing at the PGA Tour can really be done swiftly. We’ll be talking about the new-look FedEx Cup Playoffs for 13 more months before they actually happen. Thirteen months ago we were talking about Phil Mickelson’s greatest ever achievement, winning the 2021 PGA Championship. That was a public relations lifetime ago. LIV Golf is nimble, if nothing else.

For this week, we’ve got the type of fractured system we’ll have to get used to. In late July, it’ll feel even more obvious, when LIV’s next event sports an even stronger field and even stages an event in the same time zone as the PGA Tour. It may feel even more like European football, which has the English Premier League and the Bundesliga in Germany and La Liga in Spain and Ligue 1 in France. (Ironically, in all those leagues, aged-out veterans will take massive sums of money to play on a worse team or in a less-established league.)

Altogether, those leagues imply that the best players in the world don’t play against each other all the time. On Sunday mornings, Americans need multiple TVs to follow all the action, or risk ignoring some of it entirely. It’s fractured in a different kind of way, where a lot of the best players play in one league, but many others are spread out across the continent. The best footballers this August will likely be in England, but also could be in Italy. Or in Spain, Germany, or France. Where are the best golfers in the world playing this week? It could be Portland, or Kilkenny. But perhaps the greatest prize is in Silvis, Illinois? You should have a clue. It should be obvious.

Agree? Disagree? Feel free to lob praise, critiques or any commentary to the author at sean.zak@golf.com.