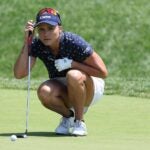 Lexi Thompson reads a putt during the final round of the KPMG Women’s PGA Championship.

As if yet another major heartbreak wasn’t enough, Lexi Thompson was dealt a slow-play fine shortly after her round concluded at Congressional Country Club on Sunday in Bethesda, Md., according to Golfweek’s Beth Ann Nichols.

Thompson was playing in the final group at the KPMG Women’s PGA Championship alongside Hye-Jin Choi and In Gee Chun, who went on to win her third major title. The group was put on the clock with two holes left on Sunday, and Golfweek reported that Choi and Thompson were both told after their rounds that they were fined for slow play. Thompson’s father confirmed the fine to Golfweek, which he said was $2,000.

The decision to put the final group on the clock at a major wasn’t one that sat well with Justin Thomas.

Thompson led the KPMG Women’s PGA Championship by two with three holes left, but she finished bogey-bogey-par to shoot a one-over 73 and tie for second. Chun, despite shooting 75, played the last six in one under to win by one.