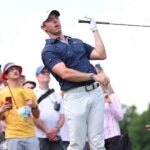 Rory McIlroy plummeted down the leaderboard Friday thanks to two crooked numbers.

After a textbook birdie at the par-3 11th hole on Friday at the Travelers Championship, Rory McIlroy was sitting pretty. Through 29 holes, he had already reached 13 under and looked to be on his way to a big 54-hole lead. Then, disaster struck.

After a tee shot out of bounds and a squirrely third on the very next hole, the four-time major champion scrawled out a quadruple-bogey 8 onto his scorecard, causing him to plummet down the leaderboard.

Then at 15, McIlroy hit another poor tee shot into a native area, leading to a double.

He made one birdie coming in to finish at eight under, six shots behind leader Xander Schuaffele, but it could have been so much better.

After his round, Rory revealed the culprit of his collapse to reporters: his fairway woods.

“Three fairway wood shots are what cost me,” McIlroy said Friday evening. “For whatever reason I haven’t been comfortable with my fairway woods the last couple weeks. You know, I just hit three loose ones there, two on 12 and then the one on 15. That was really it. I played well the rest of the way.”

But then Rory was asked how he intends to work through his fairway wood issue mid-tournament. Exhausted from his round that had just finished and perhaps frustrated by the way in which it did, Rory provided a blunt solution.

“I don’t know. Just avoid hitting them,” Rory said, continuing, “or go do some work on the range. Maybe spend a little bit of time in the warmup tomorrow hitting them and sort of getting committed to the shots I’m going to need out there off the tees.”

While Rory’s advice to “just avoid hitting them” sounds like a quip, it can actually be a good decision in certain situations.

If a specific club is giving you all kinds of trouble in a round, you might as well leave it in the bag and choose another club for the remainder of the day Then you can work on fixing your problems on the range later on, when your scorecard won’t be littered with crooked numbers.