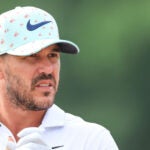 Brooks Koepka is set to join the LIV Golf series.

After five days of relative quiet as the U.S. Open consumed the attention of the golf world, the LIV Golf vs. PGA Tour battle has taken center stage again with the announcement of another brand-name commitment: Brooks Koepka.

The four-time major-winner is set to join the LIV Golf series just days after finishing 55th at the U.S. Open and one day after removing “PGA Tour” from his Twitter bio. Koepka’s involvement was first reported by James Corrigan of the Daily Telegraph and later confirmed by GOLF.com.

Koepka joins a growing list of major champions who will be on the LIV circuit as soon as next week, when the second event visits Pumpkin Ridge in Portland, Ore. Abe Ancer, who withdrew from the U.S. Open last week, is also expected to be announced as a LIV participant this week, which was reported by ESPN Desportes.

Koepka made waves last week when he was asked about LIV during a pre-U.S. Open press conference. Like many of the top players at The Country Club, he was asked various questions about his potential involvement; Koepka responded with the most emotion. He was asked, point blank, “Why have you decided to stay on the PGA Tour, and is that a permanent decision?”

“There’s been no other option to this point,” Koepka said, “so where are you going to go?”

To the LIV series, the reporter replied.

“As of last week. That’s it,” Koepka said. “I wasn’t playing last week. I’m here. I’m here at the U.S. Open. I’m ready to play U.S. Open, and I think it kind of sucks, too, you are all throwing this black cloud over the U.S. Open. It’s one of my favorite events. I don’t know why you guys keep doing that. The more legs you give it, the more you keep talking about it.”

Koepka had not been asked to speak about LIV Golf for some time. He took time away from the Tour after the Masters, where he was hurt and missed the cut. He then withdrew from the AT&T Byron Nelson before it began, in mid-May, and finished tied for 55th at the PGA Championship a week later. He got married in early June and showed up to Brookline for his first press conference in four weeks.

Koepka is following in the footsteps of his brother, Chase, who played at the LIV Golf London event earlier this month. When asked if he had spoken with Chase about the LIV event, Brooks said he hadn’t. And when asked if there was a monetary figure that would make him consider leaving the PGA Tour, he said he “hadn’t given it that much thought.”

To his delight, Koepka only had to answer a few more questions about LIV Golf. He once again called the media’s scrutiny “a black cloud” over the U.S. Open, and soon headed off to compete in the event. His next press conference in Brookline was all about the golf.