This is Will Zalatoris’ U.S. Open consolation prize 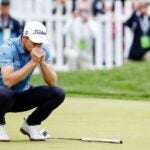 Will Zalatoris suffered another major championship heartbreak on Sunday at the U.S. Open.

BROOKLINE, Mass. — There are more losers this weekend than any in golf. That’s the thing the U.S. Open “forgets” to tell you. One-hundred fifty-six players entered The Country Club on Thursday, and 155 left as losers. And that’s not counting the untold thousands who never even made it to Brookline, losing in qualifiers around the world.

So why, on Sunday night in Boston, does it feel like Will Zalatoris is the only one?

The finish is a good place to start. Zalatoris stood in the 72nd fairway at Brookline with, at worst, even-money odds at winning his first major championship. To his left, Matthew Fitzpatrick had just disappeared into the face of a fairway bunker, staring down what could charitably be described as a horrifying approach shot into the 18th green. Fitzpatrick was hemmed against the elbow of the sand, needing a club that would simultaneously carry the distance to the flagstick, and, more pressingly, the edge of the bunker. Zalatoris trailed Fitzpatrick by one, but one peek at the lie was all he needed to know their match was a long way from over.

“I walked by it,” Zalatoris said afterward. “And I thought that going for it was going to be … ballsy.”

The crowd around both players swarmed the center of the fairway, while thousands waited in the grandstands and at the green above. The noise was deafening, and later, when Fitzpatrick surveyed his approach shot, so was the silence.

Finally, Fitzpatrick swung, an awkward slash that sent his ball carving toward the edge of the green. Miraculously, he’d managed to clear the lip of the bunker while carrying the ball the proper distance. His ball landed hard on the 18th green, settling a mere 15 feet from the flagstick.

It was the shot of the tournament, but Zalatoris didn’t flinch. Quickly, he zipped his own approach a few feet inside of Fitzpatrick’s.

“At that point, you have to assume that he’s going to hit that shot,” Zalatoris said. “When he pulled it off, tip your cap, well done. Now I have to make birdie and hope he misses.”

Up at the green, the two golfers moved like matadors, stalking in slow, deliberate circles around the hole. It was Fitzpatrick’s turn first. Realizing his advantage, he struck a safe putt that came to rest just outside of the flagstick. Quickly, he ran down the hill and tapped in for par. Now, Zalatoris’ odds were slimmer. Make the putt and extend, or miss it and lose.

Finally, Zalatoris stepped up to his putt. He made a smooth, confident stroke, and his ball reacted in kind, trickling carefully down the slope toward the hole. Then, about five feet out, Zalatoris’ ball stopped breaking. In slow motion, he watched as it slowly rolled past the flagstick, high of the hole.

He had just lost the U.S. Open.

“With about six feet to go, I thought I had it. I was just checking my phone earlier, and a bunch of people were saying that [analyst Paul Azinger] had said that everyone missed that putt high. I was the closest one all day,” Zalatoris said. “I was like, thanks for the consolation prize.”

There is another consolation prize for Zalatoris: the Silver Medal, which is presented each year to the U.S. Open runner-up at their end-of-tournament press conference. The medal remained around his neck until he walked off the podium, but by the time he reappeared mere seconds later, it was already gone.

It’s difficult to blame him. Time is the only treatment for what ails Zalatoris on Sunday night. Right now, there is only a loss — a loss that somehow feels worse than the remaining 154 losers, all but one of whom lost by bigger margins. A loss that also feels worse than all the major championship losses that have come before it.

“I’d pay a lot of money for about an inch and a half, and I’d probably be a three-time major champion at this point,” Zalatoris said. “It’s just little things. It’s not the same thing at every single one. We’re talking inches. It’s not like I finished runner-up by four or five a few times. It’s been one for all three.”

This is golf’s universal agony: there is only one winner. At the U.S. Open — a tournament Zalatoris has dreamt about since he first wandered past Ken Venturi’s trophy as a child at Cal Club — he was the loser.

But it is also golf’s universal truth: failure is not fatal. In fact, it is overwhelmingly normal.

“I’m not happy with finishing second. It’s not like I’m trying to coax that down there. I’m obviously trying to make it,” Zalatoris said. “The comfort level is there, especially now that I know I can do this. I just have to keep waiting my turn.”

And wait his turn, he will. Zalatoris has just three weeks until the next major championship — the Open at St. Andrews. The same pieces of his game that made him a contender at Brookline will make him a threat at the Old Course. Of course, it’ll take time to recover from Sunday at Brookline, but three weeks? That’s a lifetime away.

“Every golfer who wants to win a tournament, you can say they’re a little sick in the head because they’re just adrenaline junkies,” Zalatoris said. “This one hurts in particular pretty hard, but it’s motivating. I’ve got to keep doing what I’m doing. I know I’m going to get one sooner or later.”

On Sunday, Zalatoris lost the U.S. Open. There is no reward that will soften that truth, no medal that can change that reality. But that’s okay, he won’t have much time to think about it, anyway. There’s another tournament next week.

James Colgan is an assistant editor at GOLF, contributing stories for the website and magazine on a broad range of topics. He writes the Hot Mic, GOLF’s weekly media column, and utilizes his broadcast experience across the brand’s social media and video platforms. A 2019 graduate of Syracuse University, James — and evidently, his golf game — is still defrosting from four years in the snow, during which time he cut his teeth at NFL Films, CBS News and Fox Sports. Prior to joining GOLF, James was a caddie scholarship recipient (and astute looper) on Long Island, where he is from.