‘I’ll have a liver like a football’: Matt Fitzpatrick’s caddie hilariously describes his post-Open plans 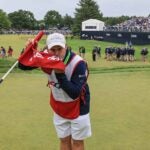 Matt Fitzpatrick wasn’t the only person to claim his first major title on Sunday at the U.S. Open.

Fitzpatrick’s caddie, Billy Foster, has been a Tour bagman for four decades. His client list includes a who’s-who of European greats like Seve Ballesteros, Thomas Bjorn, Darren Clarke, Lee Westwood and Sergio Garcia, and even a short stint with Tiger Woods.

Foster and Fitzpatrick have worked together since 2018. Despite logging dozens of victories with his various players over the years — including two with Fitzpatrick — Foster had never been on the bag for a major win. Until Sunday.

When Fitzpatrick tapped in for his par on the 18th hole at The Country Club, Foster couldn’t even watch Will Zalatoris’ putt, which would force a playoff if it went in. Instead, Foster covered his face with his hat. When Zalatoris missed, Fitzpatrick squeezed Foster’s shoulder and the celebration began.

Foster was visibly emotional, and took a moment to kiss the 18th-hole flag.

In a post-round interview with ESPN’s Michael Collins, Foster explained what he was experiencing on the green.

“Normally people have a monkey on their back. But I had a gorilla on my back,” Foster said. “It was doin’ me head in.

“I can’t even think about being happy and excited,” he continued. “It’s just … [heavy sigh] … utter relief.”

With that relief comes plenty of joy, and one of the most entertaining parts of Collins’ chat with Foster was when Foster revealed his post-Open plans.

“Let me tell you, tonight, and next week, I think I’ll have a liver like a football,” Foster said, as Collins laughed. “There’ll be a big party goin’ on tonight and all next week.”