How did Matt Fitzpatrick win the U.S. Open? It’s simple. And it isn’t. 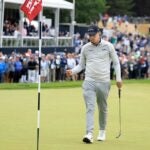 Matt Fitzpatrick on Sunday on the 15th hole at The Country Club.

BROOKLINE, Mass. — Matt Fitzpatrick wasn’t born for this day. Those are his words.

Not born? He sure looked the part, no, during this U.S. Open? Four rounds at par or better. Shots during Sunday’s final 18 at The Country Club that were daring, though his playing partner, Will Zalatoris, went with “ballsy” in describing the clincher, a fairway-bunker shot that challenged a front greenside bunker on the closing hole. Two putts later, the 27-year-old from Sheffield, England, was your newest major champion.

So what gives, Matt?

He’ll share, though a little unwillingly, because he’s humble, too. We’ll tell you ahead of time that this is a story of the underdog and hard work and being rewarded; in the wake of Saudi-backed LIV’s debut and taking the quick buck, you may welcome the cleanse.

“Not to like compare it to my football team, but I feel like I’m the same deal,” Fitzpatrick said Sunday evening. “Not expected to do well, not expected to succeed. I’ve won a major today.

“I feel like I certainly work hard for it, and that’s kind of where I’ve grown up from is that’s the mentality of everyone around there. It’s kind of you’re told it’s not upper class at all. It’s kind of — I can’t think of the words. I’ve been out of the country too long. Yeah, it’s certainly like underdog mentality, and you work for what you get.”

That he did. To guide this story, we’ll quote Fitzpatrick himself.

“I’ve done my drug test, and it was negative, so we’re all good“

He jokes. But Fitzpatrick believed that distance had been holding him back — he was averaging around 280, 285 yards off the tee — so a few years back, as GOLF’s Luke Kerr-Dineen wrote last year, he began consulting with golf biomechanist Sasho Mackenzie to plug the power leaks in his swings by undertaking routine speed-training sessions — complimented by a weight-training program that has seen him gain muscle mass.

This week, Fitzpatrick was popping it 309 yards off the tee, good for a tie for 16th in the field.

“Yeah, now I look back from where I am now to years ago and where my game was, it’s actually crazy how different my game is, it really is,” he said Saturday. “I think one thing that was kind of — well, it was the big thing really that was holding me back. Putting was good. Short game was good. Approach play was fine, but my driving, I was straight but just didn’t have that distance to take advantage of everything else.

“Now I feel like I’ve gone one more than that. Rather than just keeping up, I’m past guys. My ball speed is up considerably over the last years or so, and I think all of a sudden doing that, it just gives me a much bigger chance in competing week in, week out. I feel like that’s what it has done this year.

Does it increase your self-belief, a reporter asked.

“Yeah, no doubt,” Fitzpatrick said. “I’m sure it’s the same with Rory. He is arguably the best driver on the planet, as well as DJ, Rahm, all those boys. They step on the tee against someone, and they know they’ve got 20 on them instantly, and that’s a big difference. It could be two clubs. It could be three clubs. That’s huge when it comes to 72 holes.

“For me I definitely feel similar to that now.”

“You just have to look at Tiger“

This piece is more experiential than anything physical. But at last month’s PGA Championship, Fitzpatrick opened with rounds of 68, 69 and 67. He was in the final pairing for the final round.

“Obviously, Southern Hills, with it being a major, it’s quite different than a regular PGA Tour event,” Fitzpatrick said Saturday. “At the end of the day, they’re just really hard to win. I think up until Southern Hills, I didn’t really appreciate how hard it is actually to win a major. Yeah, I’ve not challenged really up until then. I think, myself included, and people on the outside maybe think it’s easier than it is. You just have to look at Tiger. He knocked off so many in such a quick span. That’s why I think people think, oh, it’s a piece of cake; it’s like a regular Tour event. But it’s not.

“It brings a lot more to the mental aspect of the game than other regular events, and for me I think it’s been a big change from U.S. PGA to come here to a golf course I know so well, and it’s given me extra confidence.”

That’s the old Fitzpatrick talking. This Fitz had nice showings in majors but never a victory.

The adjustment here was mental.

“I think previous years I’ve definitely kind of not had that attitude in terms of practice or worried, going home early, or maybe I should have been more putting or chipping or hitting, whatever it is,” Fitzpatrick said Friday.

“I feel like there’s been a big difference this year. It’s something that I’ve asked my coach, Mike, to keep an eye on and let me know if he sees anything of how I used to be. But I feel like so far, so good. It’s kind of about trying to keep every week the same really.

A reporter then asked: “Does it make it easier when you are in a tournament like this to just feel normal?”

“I think so, yeah. I definitely think so,” he said. “I think when you sort of play in the majors, there’s always this emphasis from the media, as well, that it’s like, wow, it’s one of the four, it’s such a big deal, and it is a big deal. It’s a huge deal to all of the players. That’s what everyone wants to win. That’s what everyone’s legacy is about.

“But you just have to try your hardest to make it consistent, do the same things each week, and not change anything. Wouldn’t do anything different this week trying to figure out my lines off the tee or spending more time around the green chipping. Still spend the same amount on the 8th here as I would on the 8th last week in Canada.

“For me it’s just trying to be consistent with everything I do.”

“I’m the same player but a very different player.”

Back to the beginning. And the ending.

Fitzpatrick believes he wasn’t born for this day, and he has every right to think that. Of course, looked at another way, we’d very much say he was.

Does he put in the time to add distance, to reflect on a disastrous finish, to reassess his process if he weren’t the underdog? For sure.

But your U.S. Open champion finds this way better, thank you very much.

“If I look back at my game nine years ago, I would say I’m the same player but a very different player,” he said on Monday. “My strengths are still my strengths, but they’ve just got better in my opinion. I think looking at what I’ve achieved, I think sometimes maybe I don’t give myself enough credit for what I have done, but my personal opinion, I’m always trying to get better, I’m always trying to do things better and find ways I can improve.

“I think for me, if someone had told me I’d be standing here and this is what I’ve achieved and done, I would have snatched their hand off.”