5 things to know for Sunday’s final round at the U.S. Open 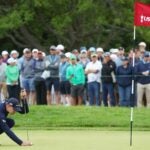 Matt Fitzpatrick is hoping to win a U.S. Open at the same course where he won his U.S. Amateur.

The 2022 U.S. Open now has only one round remaining at iconic The Country Club — and the venerable venue is showing why it’s such a special place.

The leaderboard? Stacked with big names. The number of players within five shots of the lead? Sixteen!

What’s in store for Round 4? Here are five things to know for Sunday at Brookline.

Will Zalatoris, in contention at yet another major championship.

This is becoming familiar territory for the 25-year-old, who has posted a top 8 finish in five of the last seven majors. He’s four under par through three rounds — tied with Matt Fitzpatrick at the top of the leaderboard, and ahead of Jon Rahm by one.

It’s a compelling story — especially because Zalatoris has yet to notch a victory on the PGA Tour, despite posting 15 top 10s in 50 events.

Could the national championship be his first?

Matt Fitzpatrick has a certain illustrious history at The Country Club. Nine years ago, he won the U.S. Amateur championship there.

Now, he’s in contention — tied for the lead! — to win his first professional championship on U.S. soil at the U.S. Open. Incredible!

Fitzpatrick was in contention after three rounds at the PGA Championship, but faded quickly on Sunday. Perhaps this week — with all the good nostalgia — will be his.

Judging by the leaderboard, there’s loads of drama in store for the final round. In addition to the contenders listed above, there’s defending U.S. Open champ Jon Rahm only one shot back, PGA champ Keegan Bradley is two shots back, and former U.S. Open champs Rory McIlroy and Gary Woodland are three and five shots back, respectively.

And lest we forget, the hottest player of the moment, Sam Burns, who’s seeking his first major, is three shots back.

The biggest-ever final-round comeback to win the U.S. Open dates all the way back to 1960, when Arnold Palmer overcame a seven-shot deficit to win at Cherry Hills.

The idea of a player doing that this week at Brookline seems unfathomable, and yet … players within six or seven shots of the lead include Dustin Johnson, Hideki Matsuyama, Collin Morikawa, Patrick Cantlay, Jordan Spieth and Justin Thomas.

With a contingent like that within reasonable shouting distance, it’s wise to never say never.

Will the Sunday forecast make what’s already a challenging tournament even tougher?

Overnight rain on Saturday will give way to cloudy conditions on Sunday. The temperature will be cool, maxing out at 60 degrees in the mid-afternoon, and while a breeze will be blowing around 12 mph, it should be far more gentle than what the players experienced earlier this week.

All in all, a great day is sure to be on tap for the culmination of the year’s third major.