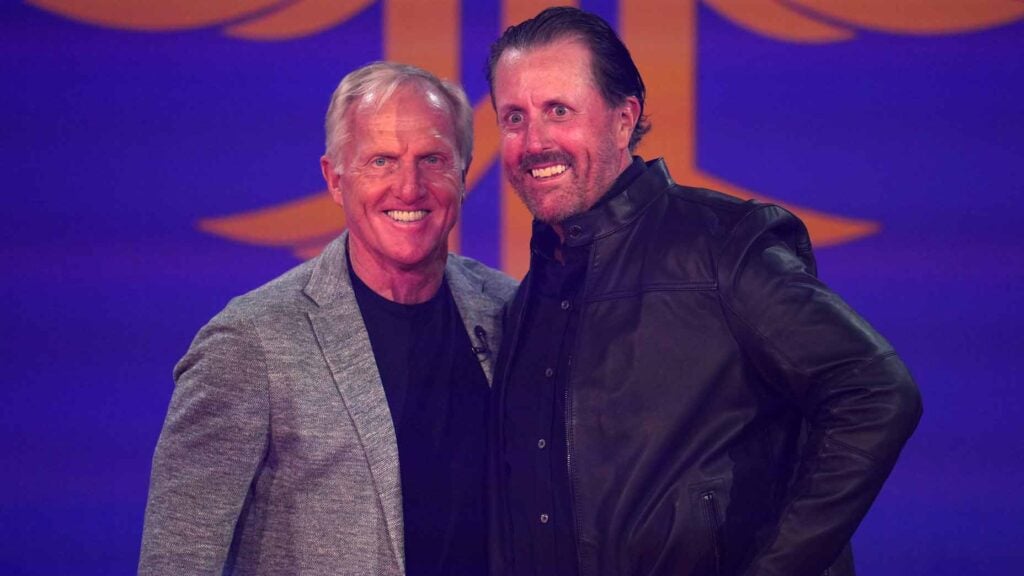 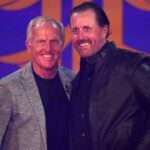 Phil Mickelson and Greg Norman at LIV’s draft party on Tuesday in London.

Golf news tends to come in a steady trickle. This week? The fire hydrant on your street has exploded. There’s golf news shooting in every direction! The landscape of professional golf is changing in real time. Guys are joining LIV. They’re resigning from the PGA Tour. Ditching the Ryder Cup. Golf’s biggest organizations are releasing their responses. And more is coming.

How to make sense of it? Read on! We’ve got you covered.

After months of speculation, Phil Mickelson officially joined LIV. The announcement came with a statement that was part apology, part reflection and part announcement.

Mickelson also opened up in a Sports Illustrated interview in which he revealed his intentions to play all eight LIV events in 2022 as well as the remaining majors (the U.S. Open and Open Championship). He stayed big picture with his regrets, referencing “a lot of mistakes” without getting into specifics. He brushed quickly past the concerns his critics have about partnering up with the Saudi Arabian government, which is funding LIV. But there was one area he volunteered freely: his own gambling past.

Harig asked Mickelson if his decision to play LIV (and receive a reported nine-figure deal to do so) came as a result of “financial difficulties.” Mickelson said it hadn’t — but he went out of his way to acknowledge that he’d struggled with gambling and addiction nonetheless.

“My gambling got to a point of being reckless and embarrassing,” he said. “I had to address it. And I’ve been addressing it for a number of years. And for hundreds of hours of therapy. I feel good where I’m at there. My family and I are and have been financially secure for some time.

“Gambling has been part of my life ever since I can remember,” he added. “But about a decade ago is when I would say it became reckless. It’s embarrassing. I don’t like that people know. The fact is I’ve been dealing with it for some time. Amy has been very supportive of it and with me and the process. We’re at a place after many years where I feel comfortable with where that is. It isn’t a threat to me or my financial security. It was just a number of poor decisions.”

The league hasn’t secured a broadcast TV deal and its current plans are to stream LIV events through Facebook and YouTube. On Monday they announced the voices behind those plans

He’ll be joined by a team of analysts that includes Golf Channel’s longtime LPGA presence Jerry Foltz, who left the network just ahead of last week’s U.S. Women’s Open. Dom Boulet, a former Asian Tour pro-turned-commentator, will join them in the booth. Former long drive champ Troy Mullins and former pro Su-Ann Heng are among the on-course reporters.

You can read more about the broadcast here.

This came via Greg Norman in a Washington Post profile. In the interview, LIV’s CEO told the Post the 15-time major champion refused an “enormous” offer to join.

From the Post story: The tour’s consultant also pitched representatives for Woods, who once staged his own public coup with the PGA Tour over marketing rights. Norman says Woods turned down a deal that was “mind-blowingly enormous; we’re talking about high nine digits.”

High-nine digits! I’ll let you parse out exactly what that means. But it sounds like a lot of money.

On Tuesday, Woods announced that he wouldn’t be playing in next week’s U.S. Open, writing that his body “needs more time to get stronger for major championship golf.” He’s planning to make his return at the JP McManus Pro-Am and then play the Open Championship.

What does that have to do with LIV? Plenty, but only indirectly. Woods won’t have to answer questions on the subject. Golf’s national attention won’t be split between Tigermania and LIV’s consequences. Instead, those coming from London’s LIV events will bear the brunt of the scrutiny at America’s national championship.

With LIV, you never quite know the names that’ll pop up. Sure enough, there was former White House press secretary Ari Fleischer moderating press conferences on Tuesday.

Not all went smoothly. Associated Press journalist Rob Harris was escorted out of the media center after a kerfuffle near the end of a press conference. In the previous presser he’d asked Graeme McDowell what he thought of LIV’s role as doing PR for the Saudi government given its record on human rights. You can see how that went down:

Several of the players were asked about sportswashing, including Talor Gooch, who followed the lead of others suggesting that was outside his area of expertise:

In his first media appearance since joining LIV, Dustin Johnson announced that he was resigning his PGA Tour membership.

He was far from the only one: The Associated Press reported that Sergio Garcia, Branden Grace, Louis Oosthuizen and Charl Schwartzel had each already resigned their membership. Kevin Na took to Twitter to explain his own decision.

There are potential advantages to resigning membership — the PGA Tour has greater say over what its members can and cannot do — but not every LIV participant had done so. Mickelson, who is a lifetime PGA Tour member, told Sports Illustrated he isn’t giving his up.

“I worked really hard to earn that lifetime membership,” he said. “And I’m hopeful that I’ll have the ability to play wherever I want, where it’s the PGA Tour, LIV or wherever else I want.”

Among the biggest questions surrounding players departing the Tour was their ability to participate in major championships. This is where things get tricky; while the PGA Tour doesn’t actually run any of golf’s four grandest events, it has close alliances with the four bodies that do: Augusta National, the PGA of America, the USGA and the R&A.

The U.S. Open is next week, so the USGA’s answer came first and it came in the form of a statement on Tuesday essentially outlining that because it considers itself the “most open championship in the world,” it would not block any LIV participant who was already qualified from participating.

“Regarding players who may choose to play in London this week, we simply asked ourselves this question — should a player who had earned his way into the 2022 U.S. Open, via our published field criteria, be pulled out of the field as a result of his decision to play in another event? And we ultimately decided that they should not,” the statement continued.

“Our decision regarding our field for the 2022 U.S. Open should not be construed as the USGA supporting an alternative organizing entity, nor supportive of any individual player actions or comments. Rather, it is simply a response to whether or not the USGA views playing in an alternative event, without the consent of their home tour, an offense that should disqualify them for the U.S. Open.”

Coincidentally we had USGA CEO Mike Whan on the Drop Zone podcast just a couple days before this all went down; he spoke to LIV’s tenuous future and outlined why he thinks it faces challenges.

You can listen to that complete interview on Apple Podcasts, on Spotify or at the embed below.

The USGA statement seemed to leave open the possibility that criteria could be changed in the future. There are several outstanding questions that would factor into players’ qualifications for majors, including LIV’s status in the eyes of the Official World Golf Ranking, pros’ status with the PGA Tour and DP World Tours and, well, there are a lot of moving parts. But the LIV pros sure seem resigned to whatever awaits.

“I can’t answer for the majors, but hopefully they’re going to allow us to play,” Johnson said. “Obviously, I’m exempt for the majors, so I plan on playing there, unless I hear otherwise.”

We hadn’t seen Mickelson in the public eye since the Saudi International in February. He made his return at LIV’s draft party with some stubble and a leather jacket:

Here’s the vibe from the draft, which was hosted by Shane O’Donoghue and Kirsty Gallacher:

And here are the draft results:

What’s next? Mickelson addresses the media on Wednesday morning, which will be a news event of its own. Further player announcements are expected to drop later in the week. Stay tuned — we’ll keep you updated as golf news continues to flood the streets.