Why Phil Mickelson is on this PGA Championship contender’s mind 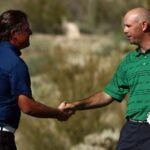 Stewart Cink didn’t realize it at the time, but 21 years ago at Southern Hills a mere 18 inches stood between him and what coulda-shoulda been a spot in a U.S. Open playoff.

Cink, believing the putt was inconsequential given his playing partner Retief Goosen needed only to two-putt from 12 feet for the title, rushed his stroke and missed the tap-in. It didn’t seem like a big deal until Goosen himself three-putted, setting up a playoff between him and Mark Brooks. So, yeah, the miss was, in fact, a huge deal.

This week, Cink is back at Southern Hills — this time for the 104th PGA Championship — and though much more than 18 inches stand between him and a shot at the title, he has once again put himself in position to contend on Sunday. After a third-round 71, Cink is at two under for the tournament, seven back of 54-hole leader Mito Pereira.

Things, of course, are much different for Cink this time around.

For one, the golf course, care of a recent Gil Hanse and Jim Wagner restoration, is longer and airier than it was at that U.S. Open, with more slopes and runoffs around the greens. “It’s completely different,” Cink said Saturday evening. “I have one memory [from 2001] — that’s missing a short putt on the last hole that cost me from getting into a playoff. It took me a while to get over, and it’s 20 years down the road almost. It’s a distant memory now.”

Cink himself is different, too. Different hairline, different clubs, different game. He can still knock it out there; he’s averaging 301 yards in driving distance this season on the PGA Tour. He can still win; he picked up two PGA Tour titles in the 2020-21 season. But he relies more on smarts and guile than he did two decades ago. He has a different caddie, too — his son, Reagan. “He’s part me,” Cink said of their bond. “Literally he thinks about golf the same way I think about it.”

At least one other thing is different, too: the notion that a player Cink’s age can win a major championship.

Phil Mickelson, of course, proved it a year ago at this very tournament, when, one month shy of his 51st birthday, he held off Brooks Koepka and Louis Oosthuizen on the Ocean Course at Kiawah Island to become the oldest major winner in history. Don’t think his peers weren’t paying attention.

“It blows the ceiling off what we thought was impossible before,” Cink said Saturday. “Phil is his own guy for sure and he’s one of the best the game has ever seen but the fact that at his age he could not only just compete but finish it off and win, coupled with the fact I know I’ve got recent wins on the PGA Tour, it really gives me a load of belief that I can go out there and compete in a tournament like this, and maybe tomorrow, you know, if I have a couple of those things that didn’t go my way today, maybe they go my way — four or five under par, you just never know. I’ve got that going for me and surely I was inspired by seeing what Phil did and that he hung in there and that he was himself and just made it happen.”

If you didn’t see Cink coming this week, you’re forgiven. Which isn’t to say he hasn’t been trending up. In March, he tied for 7th at the Valspar. He missed the cut at the Masters and then finished 68th at Harbour Town but bounced back with a T9 at the Wells Fargo, his most recent start before the PGA. This week, he has posted a cool 69-68-71 thanks in part to his superior driving; he’s third overall in SG: Off the Tee, picking up nearly two full stokes on the field in the chilly third round. “I’m wearing both the pullovers that I brought with me,” he said of his Saturday outfit. “I have nothing left in my suitcase. I saw a couple short sleeves out there, but I need to conserve heat at my age.”

Cink’s Sunday plan will be no different from his Thursday-Friday-Saturday approach. “Stay in the present and keep on what we like to call ‘bludgeoning,’ and that means just working everything down to a common denominator and executing that shot and going to find the ball,” he said. “It’s really simple, [but] it’s really hard to do when your emotions are just like going like the Indy 500 out there.

“That’s going to be the key for me tomorrow. Keep doing what I’ve been doing. I’ve been striking the ball great and just clawing and fighting, and I’m going to keep doing that. If it turns into a 64 or 65 tomorrow, who knows.”

Who knows, indeed — perhaps we’ll get another win for the ages.