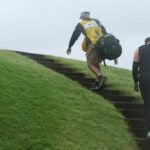 Now what for Tiger Woods? Whether or not he tees it up on Sunday, what are the paths forward?

TULSA, Okla. — Tiger Woods bent over as best he could, peering down the line of a slippery five-foot putt for par. He can’t crouch like he used to. He can’t putt like he used to, either. But he picked his spot. He committed to his stroke. And the ball rolled into the middle of the cup, setting off a roar from the crowd ringing the 18th green.

A day earlier the same green was the sight of a Woods triumph. He’d rallied from the wrong side of the cut line with his five-iron, his putter and his doggedness, playing the final six holes in two under par to earn a weekend tee time. He’d earned a Friday evening ovation with a gritty 69. Even if Woods wasn’t going to contend for the win, he’d inspired the golf-watching public with his refusal to go away.

A day later, I couldn’t help but wonder: How was this the prize he’d earned?

Woods plucked the ball out of the cup. He smiled as he shook hands with playing partner Shaun Norris and his caddie. He looked both in the eye. And then he began a painful march up the hill toward the clubhouse to sign his scorecard: nine-over 79, good for a share of last place.

Jordan Spieth was coming off the 10th tee as Woods trudged up the hill. Spieth looked like he was going to say hello, as Tour friends do, until he saw the look on Woods’ face. He gave a curt head-nod instead. Both kept walking.

Other sporting greats shift their focus as their bodies stop cooperating. They use their brands to sell sneakers or cars. They go from the field to the booth. Some use their accumulated capital to retire to a life, ironically, on the golf course. But professional golf, for better or worse, allows you to keep coming back. Woods may have softened and he may have more perspective, but he’s still defining success the same way he did a quarter-century ago: through his performances in 72-hole stroke-play golf tournaments.

Saturday morning dawned angry in Tulsa. An early thunderstorm moved tee times back some 40 minutes, though not enough for Woods to sleep in. An 8:30 a.m. tee time usually means he’s up before 5, starting the engine.

Woods is one of the great sweaters in sports, and he’d been in a full lather Thursday and Friday under the Oklahoma sun, with temperatures pushing 90. On Saturday, the wind had flipped, bringing colder air from the north. When Woods began his warmup at Southern Hills, it was 50 degrees, gusty and damp. It would stay that way.

These were the worst possible conditions for Woods. The early morning came on the heels of a late Friday finish and he struggles to get his body to cooperate when it’s cold. But early tee times and adverse conditions are inevitable features of major championship golf. It was unlucky, to some extent, that Woods got unseasonably bad conditions on Saturday at Augusta and Saturday at Southern Hills, but still — everybody else did, too. This is what he’s signed up for.

As Woods’ warmed up, television cameras captured his leg crumpling underneath him as he descended into a practice bunker. It was a visceral reminder of just how fragile this entire arrangement is.

Woods’ round didn’t start well. He made a 13-footer for par at No. 1, the sort he’d made all Friday afternoon. But he found the water at No. 2 and made bogey. He found the water again at No. 6 and made triple. TV mics picked up Woods’ commentary:

Farther than Woods had judged, which became an unfortunate theme. Woods missed with driver at 7 and 9 and made bogies. He hit irons 25 yards short at 10 and 11 and made bogies. He found the front bunker at 12 and made bogey. Things somehow got even worse at the par-5 13th, where he was pin-high in two, skulled a chip over the green and made a fifth consecutive bogey. Suddenly he was 10 over for the round, 13 over for the tournament and at the bottom of the leaderboard.

Woods laughed at himself. He shared conversation with Norris, talking about golf and children and life. But grimaces outnumbered grins. It looked like a thankless exercise. Like he was suffering in public. To what end?

“You feel so sorry for him having to go through this,” Norris said post-round. “But then again, you also see the type of person that he is; that he grinds through everything and pushes himself, even all the pain and that.”

I couldn’t help but think back to something Woods said after Thursday’s opening round, when he was asked how bad days with his leg affect his swing.

“Well, I just can’t load it,” he said. “Loading hurts, pressing off it hurts, and walking hurts, and twisting hurts. It’s just golf. If I don’t do that, then I’m all right.”

It’s just golf. Think about that. The same arena that brought Woods his greatest professional triumphs is now the site of unspeakable pain. Is the greatest golfer of the modern era doomed to wince through major championship rounds for the foreseeable future, paying some dark penance for decades of dominance?

Woods’ comeback to get to this point has been remarkable. There’s nothing glamorous about rehab, after all. And there’s something admirable about returning to compete against golfers who are younger, longer, fresher. There’s something noble about grinding to make the cut. But battling to break 80 on a damp, miserable Saturday afternoon is nobody’s idea of a good time.

Woods didn’t take questions from the media after his round, speaking briefly to one pool reporter before heading for the parking lot. He didn’t make excuses.

“I just didn’t — I didn’t do anything right,” he said. “I didn’t hit many good shots. Consequently I ended up with a pretty high score.”

Nor did Woods confirm that he’d be back for Sunday’s round.

Several hours later, as tournament leader Mito Pereira spoke to the press, the news came on the TV screen behind him: Tiger Woods had officially withdrawn.

[Editor’s note: The rest of this piece was written before the announcement — but it all holds true.]

So now what? What are Woods’ paths forward? I count three — though really only one.

Door No. 1 is for the optimists. It leads to a world where Woods’ recovery takes a turn for the better. Continued rehab and exercise strengthens his leg and ups his endurance and allows him to play 72 holes’ worth of good golf rather than half that or less. He’s competitive in major championships on guile and memory.

Door No. 2 is for those who think we’ve seen enough. Woods decides putting himself through this agony is too great a sacrifice. He plays St. Andrews and announces he won’t be playing any more competitive golf for the foreseeable future, save for dominating the PNC Championship with his son Charlie.

But Door No. 1 is wishful thinking and Door No. 2 just won’t happen. That leaves us heading through Door No. 3. This is where we look to Woods’ best moments and think that if there were just a few more of those this would be a different story.

Things could be much worse, after all. Woods has made the cut at both majors he’s played. That’s more than could be said for Jordan Spieth or Brooks Koepka or Dustin Johnson or Xander Schauffele. When other pros slink to the bottom of the leaderboard they simply fade from our collective consciousness. When Woods does, well, it leads to pieces like this one.

It’s clear Woods’ thinking is more optimistic. At the beginning of the week he admitted looking back at his Masters performance and playing the what-if game.

“Taking a step back and looking at the overall big picture, it was an accomplishment,” he said. “But that other side of me that says if I would have done things differently, I could have challenged for that thing. And I know that golf course, and I just — maybe next year will be different.”

That’s a man who finished 23 shots off the lead. Who will be 47 at next year’s Masters. Who clearly thinks he has more in the tank.

It’s just golf. Think about that again. This is the area of his life where he’s not sure he can succeed. Golf is the only thing he can’t do.

Perhaps that’s why he’s doing it.