‘Phil was not missed’: Former champ speaks out about PGA Champions Dinner 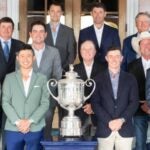 Former PGA Championship winners convened for a dinner this week at Southern Hills.

There were many reasons why Dave Stockton wanted to win the Masters, but near the top of the list: annual entrée to the coveted Champions Dinner at Augusta National.

Stockton never did slip on a green jacket, but he did find another source for an intimate meal and story-swapping with legends of the game: the PGA Championship’s Champions Dinner. “I show up in ’71,” Stockton said of the year after he won his first of two PGA Championship titles. “I am the youngest guy in the room basically, and I’m listening to these stories, and it was phenomenal.”

Still, no one will mistake the PGA dinner for Augusta’s. If the Masters’ iteration is the granddaddy of champions get-togethers, the PGA Championship’s big night out is the wacky uncle. John Daly in floral pants. Lavish party favors from the defending champions/hosts (in 2003, Rich Beem gave each of his fellow champs a pair of Ostrich cowboy boots; a year later, Shawn Micheel gifted each attendee a Gibson electric guitar). A low-key vibe. Many golf fans may not even be aware the PGA dinner is a thing.

Heck, some years, it seems, even past champions may not be aware.

Of the past winners on site at Southern Hills this week, the AP reported, just 11 attended the Tuesday night dinner. Among the no-shows: Daly, Jason Day, Brooks Koepka, Justin Thomas, Tiger Woods and Y.E. Yang.

“I don’t quite understand why,” Stockton said of the light attendance, “because I think it’s very important for us as champions to come back. I’m assuming that at the Masters you come back — if I’d have won it I’d be there every year, and that’s what this should be.”

Stockton said the take-it-or-leave-it attitude to the dinner is not a new trend. In recent years, he said, he’s noticed not only fewer winners at the table but also more non-winners. “I remember five years ago, we’re on the East Coast playing the PGA, and I’m at the Champions Dinner. Davis Love is sitting at the end — there’s 20 of us at this table. He’s on the left at the far end; I’m on the right at this end. I have no idea who these 20 people are sitting between us, and I absolutely flipped out.”

So, Stockton said, he did something about it, lobbying for fewer interloper invites, which came to fruition last year at Kiawah and also this week at Southern Hills. “We had no distractions, and it was really neat,” Stockton said.

The vibe was so neat, in fact, that no player — all of whom would be departing with a Solo Stove from the PGA of America, which selected this year’s door gift in defending champion Phil Mickelson’s absence — wanted to go home. “We ended the night, and everybody stayed,” Stockton said. “I think it blew the PGA officers away.”

Stockon, now 80 and the oldest attendee, said a few words about how much it meant to him and his wife Cathy to be back at Southern Hills, where he won his first PGA title. Then Mark Brooks, the 1996 champion, proposed a party game of sorts, asking everyone to identify their best and worst shots. Collin Morikawa, the 2020 winner, didn’t have to think long about his best: the tee shot he knocked to 7 feet on the 70th hole at Harding Park to secure him his first major victory.

Mickleson would have had an arsenal of shots, good and bad, from which to choose. Alas, he, too, was not in attendance; Mickelson, of course, is not at Southern Hills at all this week as he continues to manage the fallout from his controversial remarks about his involvement in the Saudi-backed LIV golf series.

“Phil was not missed,” Stockon said bluntly. “I think Phil would have been a big distraction [if] he was here — the story here this week is the PGA.”

A story that no doubt will be rehashed a year from now at Oak Hill when Stockton and his brethren gather for another meal.