Pro, on verge of missing cut, tries … a no-look putt? 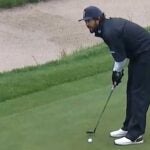 Mark Hubbard on Friday on the 9th hole at TPC Potomac.

So he hit a no-looker.

“Is he going to no-look this?” announcer Jeff Eisenband said on the PGA Tour Live broadcast. “Hold on, hold on. He did.”

Indeed. In one of the lighter moments you’ll see, the affable pro lined up his 16-foot left-to-righter on the par-3 9th at TPC Potomac, then looked up and out to the right. And putted. He held his head in the position until his birdie putt missed to the right.

And then Hubbard smiled.

“Oh he should have made that,” announcer Doug Smith said on the PGA Tour Live broadcast. “Put that on repeat all day. If you’re going to miss the cut, miss it with some pizazz.”

Of course, Hubbard is no stranger to flare.

A little over a year ago, at the American Express, he was also on the verge of a missed cut. And on his final hole. So he introduced the masses to the Snail stroke. Don’t know it? It’s a Hubbard special. To do the Snail like him, you hold the putter with your left hand, gyrate yourself downward, grip the putter with just your right pinky at the bottom of the shaft — and hit. He missed the putt, but at least a few folks watched it.

“What?” announcer Terry Gannon said on the Golf Channel broadcast at the time.

“What in the heck is that?” analyst Curt Byrum said.

“That is next level right there,” analyst Trevor Immelman said.

All of which begs a question: What does Hubbard have in store should he be putting with nothing at stake again?