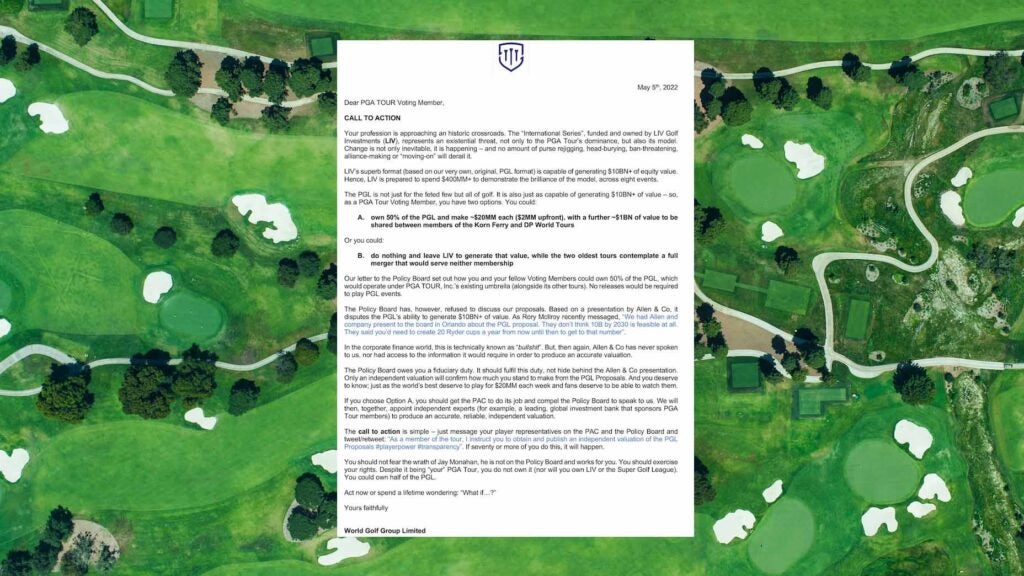 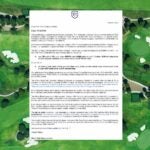 The Premier Golf League has sent a letter to the PGA Tour’s Policy Board.

The Premier Golf League sent a letter to the PGA Tour’s Policy Board, laying the stakes for men’s professional golf at what it declares to be “an historic crossroads” for the game. The PGL letter presents itself as an alternative to the Saudi-backed LIV league, claims its vision is capable of generating $10 billion in value and promises that 50% of that value would be spread to the players. It also requests an independent evaluation of the proposal, calling the Tour’s commissioned presentation “bulls—.”

Need a minute? Can’t blame you. Let’s make some sense of all of this, one thing at a time.

What is the PGL and how is it different from LIV?

Good question. The PGL and LIV Golf have similar formats in mind for pro golf — 54 holes, team structures, etc. — but different sources of funding and different financial plans. LIV’s backing comes from the Public Investment Fund, the sovereign wealth fund of Saudi Arabia. The PGL’s funding involves private investors and franchise owners and does not include Saudi backing. The PGL’s vision would have it exist under the PGA Tour umbrella and give players up-front cash payments plus 50% equity.

The PGL’s new letter compliments (and takes credit for) LIV’s vision, calling attention to the “superb format (based on our very own, original, PGL format).” But it presents itself as an alternative to LIV.

What does the new letter demand?

Demand No. 1: An audience with Tour pros.

First, it demands an audience with the PGA Tour’s Policy Board. That board is comprised of four PGA Tour pros — Kevin Kisner, James Hahn, Charley Hoffman and Rory McIlroy — and six other independent directors (non-players). The PGL has not been able to secure an audience with PGA Tour commissioner Jay Monahan and, despite McIlroy previously stating his interest, hasn’t been able to present to the policy board, either.

The PGL claims that the board has a “fiduciary duty” to learn more about the proposals and to share its letter with the PGA Tour’s voting members (its players).

“It is difficult to see how a policy board member could refuse to speak to us (or agree to obtain the Independent Valuation) and still fulfill his or her fiduciary duty to the Voting Members,” an additional PGL document states.

The second demand is for that independent valuation. One reason the Tour has been publicly dismissive of the PGL plan is because it commissioned a study from Allen & Co. that disputed the PGL’s ability to generate $10 billion by 2030.

The PGL letter included a correspondence from McIlroy: “We had Allen and company present to the board in Orlando about the PGL proposal. They don’t think 10B by 2030 is feasible at all. They said you’d need to create 20 Ryder Cups a year from now until then to get to that number.”

The PGL follow-up on that point was particularly spicy: “In the corporate finance world, this is technically known as ‘bulls—.’” Their objection is that Allen & Co. aren’t independent, haven’t spoken to the PGL and haven’t done any of the necessary research nor been privy to relevant financials to come to that determination.

The letter includes a call to action and asks Tour pros to message player representatives with a version of the following language: “As a member of the tour, I instruct you to obtain and publish an independent valuation of the PGL Proposals #playerpower #transparency.”

Seventy or more such messages, it adds, would trigger a response.

What else does the letter say?

The letter emphasizes that under the PGL vision, Tour pros wouldn’t need to get releases to play PGL events because it would live under the PGA Tour umbrella. It places this vision as a clear counter to LIV, which it describes as “an existential threat.” It also encourages action.

“You should not fear the wrath of Jay Monahan, he is not on the Policy Board and works for you. You should exercise your rights. Despite it being “your” PGA Tour, you do not own it (nor will you own LIV or the Super Golf League). You could own half of the PGL.”

“Act now or spend a lifetime wondering: ‘What if…?’

What else is going on?

Quite a bit! Lee Westwood was the latest to speak out on applying to play the inaugural LIV event outside of London, joining Phil Mickelson, Louis Oosthuizen and a host of top-100 pros.

As for the Tour? They have claimed to have moved on from any outside proposals. It’s not that simple, of course — the proposals will keep swirling. But they have chosen to respond by laying low, staying relatively quiet and continuing with the current season, as scheduled.

According to the PGL letter, pros have two options, as stated below:

A. own 50% of the PGL and make ~$20MM each ($2MM upfront), with a further ~$1BN of value to be shared between members of the Korn Ferry and DP World Tours

B. do nothing and leave LIV to generate that value, while the two oldest tours contemplate a full merger that would serve neither membership

It’s not that simple either, of course. The PGL hasn’t yet demonstrated the validity of its model nor the extent to which it could implement its plan. It hasn’t shown exactly how it would integrate its vision with the current PGA Tour model. Still, every player and agent has to be intrigued by the claims of $5 billion equity. Every PGA Tour pro has to be curious about a cash advance of $2 million. Every Korn Ferry Tour pro must be intrigued by a $300,000 cash payment.

In other words, the players do have options. Behind the scenes, no doubt, they’re hoping to learn more. Whether it finds a foothold with players remains to be seen. But the PGL isn’t going away just yet.

You can see a copy of the letter below.