‘Everything can be rectified’: Jon Rahm defends Phil Mickelson’s legacy 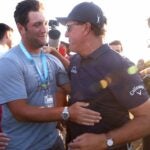 Phil Mickelson is currently in hiding, at least from the professional golf world, but his name and his reputation are squarely in the spotlight — and hanging in the balance.

The six-time major champion was long-rumored to be connected to Greg Norman’s upstart LIV Golf Invitational Series, but his central involvement with the Saudi-backed competitor to the PGA Tour was only revealed when comments he made to Mickelson biographer Alan Shipnuck were released earlier this year, comments in which he also brashly criticized both the Tour and LIV’s financiers.

The resulting media firestorm sent Mickelson underground and out of the public eye, and it left a reputational scar on the face of his sterling 30-year pro career. (The best example of the damage done? It remains unclear whether Mickelson, who already skipped the Masters, will play next month’s PGA Championship to defend his miraculous 2021 title that made him the oldest major winner in history.)

Mickelson’s defenders this side of Gary Player have been scarce over the past few months, at least in the public sphere. Although one other 2021 major champion who is 24 years younger than Mickelson, Jon Rahm, has expressed some empathy.

On Tuesday in Mexico ahead of the inaugural Mexico Open at Vidanta, Rahm offered up the most vocal defense of Phil Mickelson yet — not of his actions, but of his reputation.

In an interview with Golf Channel’s Todd Lewis, Rahm argued that he doesn’t think “[Mickelson’s] whole career or whole legacy should change because of a couple comments. Everybody makes mistakes, and everything can be rectified, and I believe it can happen, but it has to come from him as well.”

Rahm added that Tour pros haven’t been the only ones who have benefitted from Mickelson’s career — golf fans have, too.

“The guy has given his life to the public,” Rahm said to Lewis. “No one has signed more autographs, no one has done more for the fans as well.”

Rahm is close with Mickelson, first meeting him when prepping for the big leagues at Mickelson’s alma mater Arizona State under head coach Tim Mickelson, Phil’s brother. Rahm and Mickelson also share the same agent in Steve Loy. After Rahm won the 2021 U.S. Open at Torrey Pines, Mickelson was waiting to congratulate him by the 18th green.