2022 Mexico Open at Vidanta tee times: Round 1 groupings for Thursday 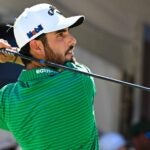 Abraham Ancer is looking to win with Mexican fans behind him this week.

The opening round of the 2022 Mexico Open at Vidanta kicks off this Thursday. You can find full Round 1 tee times for the tournament at the bottom of this post.

Featured grouping for Mexico Open Round 1

As the foremost Mexican golfer in the men’s pro ranks, Abraham Ancer has a lot running on the first-ever Mexico Open at Vidanta. The 31-year-old pro captured his first victory last season at the WGC-FedEx St. Jude Invitational, briefly rising as high as No. 11 in the Official World Golf Ranking.

Now Ancer has a chance to become the inaugural champion of his home country’s national championship, but he’ll face some stiff competition from the likes of World No. 2 Jon Rahm, 2019 U.S. Open champion Gary Woodland, former Masters champion Patrick Reed and more.

Ancer will start his tournament on Thursday afternoon at 2:18 p.m. ET alongside Tony Finau and Kevin Na. You can stream Thursday’s opening round via PGA Tour Live on ESPN+.

(GOLF.com may receive a commission when you sign up for ESPN+ through the link above.)

Browse the complete first-round tee times for the 2022 Mexico Open at Vidanta below.

How to bet on the Mexico Open

Looking to make a (legal!) wager yourself? We teamed with BetMGM, and the online sportsbook is offering a “Risk-Free Bet” up to $1000 promotion. Sign up for an account to get into the action today.