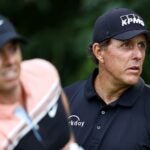 Welcome back to the Monday Finish, where we’re spreading rumors this column was offered $30 million to join the SGL. Let’s get to this week’s action!

FIRST OFF THE TEE

Before we talk about Phil Mickelson dominating this week in golf headlines, I’d like us to take a trip down memory lane to the 2019 Genesis. Mickelson entered that week fresh off a win at Pebble Beach, a remarkable feat for a 48-year-old Tour pro.

Mickelson didn’t light up the leaderboard at Riviera that year; he finished T37. Looking back now, three years later, the only notable thing about his week was the stretch of golf that followed. Mickelson has played 60 PGA Tour events since then. He has finished inside the top 15 exactly three times. His victory at the 2021 PGA Championship wasn’t just a shocking victory; it was incredibly useful. It bought him months and years of extended legitimacy. Mickelson’s greatest feat may be his stranglehold on golf’s attention economy. Who else could serve as the talk of the Tour while only contending an average of once per year?

But being an occasional contender and full-time provocateur can be a turbulent position. In just the last three weeks Mickelson has uttered two two-word phrases that will stick with him the rest of his career (or at least until he replaces them with the next salvo). The first phrase, “obnoxious greed,” was used in reference to the folks at the PGA Tour, which has been Mickelson’s home the last three decades. The second phrase, “scary m—–f—–,” was used in reference to Mickelson’s potential new bosses in a breakaway Saudi league that Mickelson has now admitted that he helped create. Now that he has turned biting the hands that feed him into a full-time sport, Mickelson’s next move will prove a tricky escape even for the master of the 64-degree wedge.

Who won the week?

The stakes were high for the Tour this week. Riviera is considered the best golf course on its schedule. Tournament host Tiger Woods is its North Star. As Saudi league rumors continued to swirl it felt important for the Tour to showcase the best version of its product to double down on the rollicking party it threw last week in Phoenix.

Let’s recap how the week went for Tour supporters. Top pros emphasized their allegiances; Jon Rahm, Collin Morikawa, Viktor Hovland, Justin Thomas and Rory McIlroy were among those who declared themselves PGA Tour pros. Other fan favorites laid their swords at Jay Monahan‘s feet, too, including Max Homa, who delivered a particularly poignant monologue on the subject that included this phrase:

“Money makes me comfortable. It hasn’t made me happy.”

And there was this, from Harry Higgs:

What happened next? Phil Mickelson said the quiet part out loud. Journalist Alan Shipnuck released an interview he’d conducted with Mickelson in November in which Lefty laid out his motivations for helping start a rival tour. The interview’s release led to an intense reaction from fellow pros. Thomas called it “egotistical.” McIlroy called it “selfish.” Billy Horschel called it “idiotic.” And in the days that followed, the Tour released statements from Dustin Johnson and Bryson DeChambeau — two top pros extensively connected to Saudi rumors — reaffirming their commitments to the PGA Tour.

Time will tell if reports of the Saudi league’s demise are greatly exaggerated; they have committed pros and they have plenty of money. But the air feels like it’s been let out of the balloon. Advantage, Ponte Vedra.

Letting loose at the mic

That reaction to Mickelson’s comments was unlike anything I can remember on the PGA Tour. Thomas’ initial response — in which he called Mickelson’s remarks “egotistical” — absolutely dripped with disdain. And McIlroy’s salvo on Sunday began, “I don’t want to kick someone while he’s down,” which reinforced the fact that Mickelson is, in these guys’ eyes, down bad. McIlroy followed that with a couple targeted sentences that included the following words: naive, selfish, egotistical, ignorant, surprising, disappointing and sad. Yikes.

One reason it was such a compelling week on Tour is that one of its brightest stars, 23-year-old Joaquin Niemann, opened with back-to-back stupendous rounds of 8-under 63 and finished off the best week of his professional career. He held off a star-studded leaderboard that included another young rising star, Cameron Young, plus world No. 2 Collin Morikawa, world No. 4 Viktor Hovland and the likes of Adam Scott, Justin Thomas and more.

Niemann has been among those rumored to be considering a jump to the Saudi league, which added a layer of complexity to his win. But in his post-round press conference he didn’t sound like someone who thinks the current tournament system is broken:

“Obviously everyone’s here to compete against the best players in the world. I’m here to do the same. I want to compete with the best players in the world, I want to be No. 1 one day,” he said. “I think there’s nothing better than what I’m feeling right now. Winning a PGA Tour event, getting a trophy, having Tiger there, all the history behind, there’s nothing that can compete with this.”

Of the pros chosen to speak with the media in pre-tournament coverage, Adam Scott demonstrated by far the most interest in an alternate tour, calling the limited schedule “appealing” and admitting he’d been in discussions with the tour’s organizers. Then his play took center stage; he opened 68-65 to jump into contention. By Sunday, however, the focus was split between Scott’s play and his sweater, which he’d put in play all four rounds.

By the end of the week he’d ditched his beard and appeared clean-shaven — but still wearing the same sweater. Asked about his palette on Monday at the Adam Scott Junior Championship, Scott wasn’t sure to make of all the attention:

Korn Ferry Tour fans had their eye on Cameron Young entering this season; he won twice last year on golf’s top developmental tour and was hoping that game would translate to his rookie season on the PGA Tour. Good news: it did! Young shot a blistering second-round 62 to join Niemann in a class of their own and stayed there on the weekend, adding steady rounds of 69-70 to finish T2 alongside Morikawa.

With the runner-up finish Young jumps to No. 53 in the world, which means he’s primed to join the A-List of Tour pros who can tee it up just about anywhere they want to. One more top finish would mean an invitation to Augusta National, too, marking the next step for a pro very clearly on the rise.

I wasn’t sure how to categorize Tiger Woods‘ outlook on his own game because he sent us cautious signals. Woods answered questions about his health twice, once to reporters and once to Jim Nantz on the Saturday CBS broadcast. He downplayed his readiness both times, insisting that he’s a long way from tournament-ready play.

But that doesn’t mean he’s as far as he’s letting on. One moment was telling: Woods bristled at the idea that he would only play the Masters Par-3 Contest.

“Well, I can walk that now,” he said. “I’m talking about playing golf.”

He expanded to Nantz, who pressed him on a potential Masters return.

“You will see me on the PGA Tour,” Woods said. “I just don’t know when. Trust me, I’d love to tell you that I’m going to be playing next week, but I don’t know when, which is frustrating in that sense because I’ve been down this road before with my back, where I didn’t know when I was going to be able to come back. It’s hard, because it’s hard to not have goals out there. OK, I want to play this event so I can set myself up for that mentally and physically and emotionally. I don’t have any of those dates in my head. I don’t know yet.”

“Augusta, any shot that you would play the Masters this year?” Nantz asked.

So you’re saying there’s a chance…

As covered above. One interesting wrinkle to add, at least journalistically, comes from Shipnuck’s podcast discussion with Matt Ginella about the article. Ginella asked Shipnuck if Mickelson had been in touch since the article’s release. I transcribed a snippet (and you can listen to the whole thing here):

“I got one text from him and his tone was — he was displeased,” Shipnuck said. “He tried to go down that road of ‘Oh, I thought this was a private conversation between you and I,’ and I shut that down really fast. And his heart wasn’t really in it anyway. He knows the truth. I don’t know what he’s going to say going forward, but he knows that this was an on-the-record conversation and it was for the book and he never asked for any of this to be private.

“You can spin a lot of things but it’s hard to lie face-to-face to the person that knows the truth. He can tell what he wants to other people but he and I know what happened and there’s no use trying to bulls— me because I was there and so he didn’t try very hard, it was a short pithy text and I wrote back and that’s been the sum total since the story dropped.”

Wyndham Clark was the latest to suffer the indignity of a wrong-score disqualification after signing for an incorrect number at the Genesis. Clark wasn’t likely to make the cut so this had no material impact on his PGA Tour standing — but this still feels incredibly silly every single time it happens.

3 things to watch this week.

The Honda Classic may not have the same stature on Tour that it once did, but there’s no questioning the strength of its Monday Qualifier. So it’s no surprise that a whole bunch of Florida-based pros are deadlocked in a tight one…

By the time you read this it might have already concluded. Or it could take all day Tuesday, too.

He hasn’t posted anything since it all went sideways last week. Hasn’t liked a single tweet, either. That’s not like him! Before long he’ll try to regain control of the message, I would think. But in what manner?

This was an evisceration. Rory in flow. Worth your time.

We’ll see you next week!