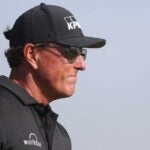 Days after Phil Mickelson’s explosive comments about a proposed Saudi-funded golf tour were made public, the six-time major winner issued an apology on Tuesday, announcing he would be “taking some time away.”

“Although it doesn’t look this way now given my recent comments, my actions throughout this process have always been with the best interest of golf, my peers, sponsors, and fans,” Mickelson began. “There is the problem of off record comments being shared out of context and without my consent, but the bigger issue is that I used words I sincerely regret that do not reflect my true feelings or intentions. It was reckless, I offended people, and I am deeply sorry for my choice of words. I’m beyond disappointed and will make every effort to self-reflect and learn from this.”

The comments he’s referring to came in an excerpt for a forthcoming biography by Alan Shipnuck titled Phil: The Rip-Roaring (and Unauthorized!) Biography of Golf’s Most Colorful Superstar, published Feb. 17 on FirePitCollective.com. (Shipnuck has disputed Mickelson’s characterization of their conversation. Soon after Mickelson released his statement, Shipnuck tweeted, “The ‘off the record’ piece of this is completely false and I’ll have more to say on that shortly.”)

The excerpt detailed Mickelson’s involvement with LIV Golf, the new company headed by Greg Norman that is expected to launch a new rival golf tour later in 2022 and is backed by the Public Investment Fund of the Saudi Arabia government. Mickelson’s called his new partners “scary motherf———s,” and he also insisted that PGA Tour media rights should be redistributed more equitably to Tour members, a recent sticking point that became news just weeks ago.

“Golf desperately needs change, and real change is always preceded by disruption. I have always known that criticism would come with exploring anything new. I still chose to put myself at the forefront of this to inspire change, taking the hits publicly to do the work behind the scenes.

“My experience with LIV Golf Investments has been very positive. I apologize for anything I said that was taken out of context. The specific people I have worked with are visionaries and have only been supportive. More importantly they passionately love golf and share my drive to make the game better. They have a clear plan to create an updated and positive experience for everyone including players, sponsors, networks, and fans.”

Mickelson’s remarks made waves across the PGA Tour, as well as in the mainstream media. Both the New York Times and Washington Post covered his comments. Meanwhile, at the Genesis Invitational, where the top 10 ranked players in the world were playing, many of them refuted Mickelson’s stance.

Justin Thomas called Mickelson’s comments ‘egotistical,’ while Joel Dahmen said that “Phil speaks for Phil.” On Sunday, Rory McIlroy added: “I don’t want to kick someone while he’s down obviously, but I thought they were naive, selfish, egotistical, ignorant. A lots of words to describe that interaction he had with Shipnuck. It was just very surprising and disappointing, sad. I’m sure he’s sitting at home sort of rethinking his position and where he goes from here.”

Mickelson himself had gone radio silent, not tweeting from Feb. 11 until sharing the statement Tuesday afternoon. In it, Mickelson described how he is content letting his business partnerships end or pause for the time being, “given the current circumstances.” KPMG, which has been a longtime sponsor of Mickelson’s shortly released a statement of its own clarifying sponsorship agreement was ended, effective immediately.

Mickelson’s statement included plenty of regret and continued with, “I have made a lot of mistakes in my life and many have been shared with the public. My intent was never to hurt anyone and I’m so sorry to the people I have negatively impacted. This has always been about supporting the players and the game and I appreciate all the people who have given me the benefit of the doubt.

“Despite my belief that some changes have already been made within the overall discourse, I know I need to be accountable. For the past 31 years I have lived a very public life and I have strived to live up to my own expectations, be the role model the fans deserve, and be someone that inspires others. I’ve worked to compete at the highest level, be available to media, represent my sponsors with integrity, engage with volunteers and sign every autograph for my incredible fans. I have experienced many successful and rewarding moments that I will always cherish, but I have often failed myself and others too. The past 10 years I have felt the pressure and stress slowly affecting me at a deeper level. I know I have not been my best and desperately need some time away to prioritize the ones I love most and work on being the man I want to be.”

The statement was distributed to the media just before 4 p.m. ET, directly before a mandatory attendance Tour players meeting at PGA National.