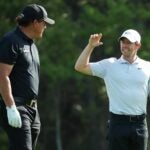 Phil Mickelson and Rory McIlroy in 2019 at the Players Championship.

Rory McIlroy said he didn’t want to “kick someone while he’s down.” Instead, he went with a 56-word punch.

In an answer to a question over Phil Mickelson comments published earlier this week by Fire Pit Collective golf website, McIlroy unloaded on the six-time major champion, who has become closely associated with a proposed breakaway golf league funded by Saudi Arabian money.

“I don’t want to kick someone while he’s down obviously, but I thought they were naive, selfish, egotistical, ignorant,” McIlroy said Sunday after his final round at the Genesis Invitational. “A lot of words to describe that interaction he had with Shipnuck. It was just very surprising and disappointing, sad.

“I’m sure he’s sitting at home sort of rethinking his position and where he goes from here.”

McIlroy’s response came after Alan Shipnuck of the Fire Pit Collective wrote this week of a phone conversation that he had had with Mickelson in which he described himself as a key architect in the Saudi league — and added that he hoped the plan would generate leverage in future negotiations with the PGA Tour. The published story came alongside comments this week from a host of pros who were asked if they would play in the league, which reportedly will offer guaranteed money, or stick with the Tour.

On Wednesday, in his pre-tournament press conference, McIlroy repeated his long-standing preference for the PGA Tour, saying he was “so sick” of talk of the proposed league. He doubled down on the PGA Tour on Sunday.

“Like I’ve always reiterated, I feel like this is the best place to play golf if you’re an elite professional golfer,” McIlroy said. “Maybe I’m fortunate that I’ve been more privy to the inner workings of the Tour and I’ve been more involved and got quite a good relationship with the leadership team on the PGA Tour, Jay [Monahan], Andy Pazder, Ross Berlin, all those sort of guys. Every time I walk out of a meeting or walk out of any sort of interaction with them, I’m always very confident that the Tour’s headed in the right direction.”

Earlier Sunday, Dustin Johnson and Bryson DeChambeau, long rumored to be part of the breakaway league, also shared statements that they would be sticking with the PGA Tour, and McIlroy said those announcements, along with confirmation from other players, would render the Saudi League “dead in the water.” A reporter then asked McIlroy: “If you’re a golf fan who has been enduring this over the past two years and speculation, what should their takeaway be from this?”

“I would say don’t try to fix something that’s not broken,” McIlroy said. “I don’t think that the Tour and the system is broken. Are there things that could evolve and get better and maybe create better fan experiences for people watching at home or that come to tournaments, different formats, stuff like that? Yeah, of course.