Justin Thomas was asked by a fan one of the biggest Saudi questions. JT answered. 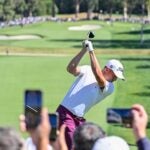 Justin Thomas hits his tee shot on Friday on the 1st hole at Riviera Country Club.

The conversation in golf, of course, at least the strong majority of it of late, has been. In short, it’s been this: There looks to be a guaranteed-paycheck, upstart golf league funded by Saudi Arabian cash, and pros are deciding whether they’re in or out. The talk may have reached its zenith — for now — this week after Alan Shipnuck of the Fire Pit Collective website wrote of a phone conversation that he had had with Phil Mickelson in which the six-time major champ described himself as a key architect in the league — and added that he hoped the plan would generate leverage in future negotiations with the PGA Tour.

Which brings us back to Thomas. In response to the Mickelson comments, pros at the Genesis Invitational were asked for theirs. And Jon Rahm, the world No. 1, gave his allegiance to the Tour, which golf website Golf Monthly shared on social media. The quote:

“This is my official, my one and only time I’ll talk about this where I am officially declaring, let’s say, my fealty to the PGA Tour,” Rahm said. “I’m a PAC member, and I have a lot of belief in Jay Monahan and the product that they’re going to give us in the future. There has been a lot of talk and speculation on the Saudi League. It’s just not something I believe is the best for me and my future in golf, and I think the best legacy I can accomplish will be with the PGA Tour.

“I’ve said it many times in press conferences before, I don’t do this for the money, which to me is the only appeal to go over there. They throw numbers at you, and that’s supposed to impress people. I’m in this game for the love of golf and the love of the game and to become a champion, right? I grew up watching many great players play great events such as this one, and there’s history and legacy to those things. That’s something that has a lot of appeal to me.”

“I think you’re both amazing, although I don’t know you…but It’s hard to understand saying I don’t do this for the money…after already earning more money than most could ever dream of…again, no conflict, just perspective,” the fan wrote. “I hope you both win all four majors!”

“Totally understand that,” he wrote five minutes later. “It’s more the concept of saying we grew up practicing and playing to be the best in the world, not to have a certain amount of money. Yes the money is a great addition, but we spent all that time as kids to be in the history books and win majors

After Thursday’s first round at the Genesis, Thomas, when asked if he would prefer the Saudi conversation to end and for the focus to return to golf, said as much too. He even answered before the reporter could finish their question.

Is it surprising that Thomas would double down on earlier comments? Not really. But it should say something that he’d enter the online fray — during a tournament — to confirm where he stands.

“Yeah, I mean, I think that’s a big reason why I’ve been in the position I’ve been in is I — I’ve never really gone down that road,” Thomas said Thursday at the Genesis. “I have a lot of things I’m focused on accomplishing out here, and I’ll be the first to say that, yeah, there’s plenty of things that I would love to see improve with the PGA Tour, but that’s a part of the process, you know. All you want to do is better the product, and one by one, if we can improve this here, this there and keep getting better, then everybody wins.

“I’m very, very content with what’s going on. All — I mean, the reason I play golf is to create a legacy and win as many times as I can on the PGA Tour. So that’s why I would like to say I’ve had the distraction and that’s maybe why I’ve played poorly the last year, but that unfortunately was not the reason why.”