Did Harry Higgs legend grow? Pro chips in — as fan taunts him with drink, he says 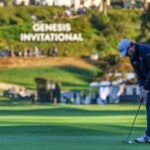 Harry Higgs during Thursday’s first round of the Genesis Invitational.

A Harry Higgs fan, this fan was not.

How could they be? If they truly knew the nearly universally loved pro, there’s no way they would have tried to distract him with what Higgs said was a cocktail as he chipped to the right of the 13th green at Riviera. Yes, it was rude. But it was also unwise. To the pro who just last week lifted his shirt and bared everything that was below it in front of 20,000 sauced-up supporters at the WM Phoenix Open, swirling a drink in a cup was but a drop-in-the-bucket bother.

A few seconds later, the legend of Harry Higgs only grew. He flopped a wedge just onto the fringe, his ball rolled about 15 feet, and he raised his right hand one rotation of the golf ball before it dropped into the cup for a birdie three. That same hand then pointed behind him, and Higgs gave a thumb, ‘yerrr out’ motion as if he were a bartender at last call.

There maaay have been an obscenity, too.

“Yeah, I did not hit a great wedge here, and my man behind me was swishing around his cocktail, and it took a while for me to be able to play the shot, but I had it killed in the fringe there and just watch it trickle, trickle, trickle,” Higgs said afterward on Golf Channel in an interview with Kira K. Dixon. “Fortunately it got there again. That was a nice little bonus.

“I told him to drink his drink so he would stop making noise.”

“Cheers to you there,” Dixon said.

Indeed. And cheers to this, too. After a double bogey on the par-3 4th, where he missed the green right and needed four shots to cover 25 yards, Higgs was five-over during Friday’s second round of the Genesis Invitational, and a handful of players from the bottom. After a par on 18, he was even and had 36 holes ahead.

In between? A seven-hole stretch where he played five-under golf. On the par-5 11th, he rolled in a 35-footer for eagle. Then came the birdie on 13. Finally, on the par-5 17th, from a tricky lie in a left greenside bunker, Higgs flopped his ball about 30 feet short of the hole, watched it release, then watched it drop for a second eagle.

“Another weird one,” Higgs said on Golf Channel. “It just felt like a big splash. As soon as I hit it, I knew it was in. And fortunately it went right in the middle of the hole. It was difficult to settle myself to play 18 and then be able to make par there to have a weekend here, and I was fortunate to do just that.”

And now comes Saturday, where he’ll begin 16 shots behind leader Joaquin Niemann, but just six strokes out of the top 10. And how would Higgs unwind ahead of time? The Higgs believers know.

So this is more for those who aren’t.

“I’m relieved because I’ve had some not-so-good golf, but it’s better than I’ve been giving myself credit for,” Higgs said on Golf Channel. “And I’m super excited to play this place for two more days. I absolutely love it here. And I just got two more days to get better and go hit a few good shots and take that into next week. I’m really pleased with the finish. Probably go back and have a drink to wind down and then just go to sleep and get ready to hopefully make some more eagles tomorrow.”