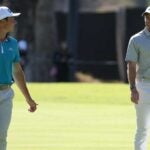 Viktor Hovland and Rory McIlroy talk during the first round of the Genesis Invitational.

PACIFIC PALISADES, Calif. — Phil Mickelson’s whereabouts are a telling sign for how weird things are getting on the PGA Tour this week. Instead of playing this week’s Genesis Invitational, or last week’s WM Phoenix Open — two mainstays on his annual schedule — Mickelson is reportedly in Montana instead. Skiing.

A lot of PGA Tour players ski, but they sure don’t do it in mid-to-late February. But that’s the way things are going right now. Things feel a little bit off. Mickelson is absent. Bryson DeChambeau is, too, nursing an injury and denouncing reports about any other intentions. The top 10 players in the world are all competing at Riviera Country Club, but their appearance has taken a backseat to their willingness to pledge allegiance to the PGA Tour. In the face of questions being lobbed everywhere, that’s more important.

Just about every top pro has been asked where they stand on the Saudi-backed golf league. Most are in a rush to discuss the guaranteed money and how it will or won’t change their lives. Some, like Adam Scott or Jason Kokrak, are complimentary. Others, like Jon Rahm or Collin Morikawa, call it a risk. The more questions asked, the more ardent the responses become. Rory McIlroy, who is willing to discuss just about everything when it comes to PGA Tour business, is outright annoyed that the discussion continues to percolate. And then there’s the leader of the tournament through two rounds, Joaquin Niemann, who when asked about it all decided he didn’t want to disclose anything, as though he was being deposed.

Weirder yet, Pat Perez, Justin Thomas, Joel Dahmen — all competing this week — have all been asked to discuss comments Mickelson made back in November for a forthcoming biography called “Phil: The Rip-Roaring (and Unauthorized!) Biography of Golf’s Most Colorful Superstar.” Normally, players who haven’t read particular quotes or stories are inclined to not say anything at all, but those three all had plenty to say in this instance.

Thomas called Mickelson’s thoughts “egotistical.” Dahmen said “Phil speaks for Phil,” not for him. Perez said just about everything on his mind. But the point is this is all just weird, weird, weird. Spicy, months-old comments made in November are taking precedence in headlines over birdies, pars and bogeys in February, at one of the most cherished courses on Tour. The weirdness is just beginning.

On Tuesday this week, the Tour’s Player Advisory Council met to discuss various topics. Webb Simpson and Peter Malnati were elected new co-chairmen of the PAC. There’s nothing weird about that, except that next year they’re set to overlap with Charley Hoffman on the Tour’s Policy Board, a much more exclusive group.

It was Hoffman of all people who, last week, took to Instagram to decry one of the Rules of Golf, and highlight the Rules as a reason why Tour players are considering taking their talents elsewhere. Earlier this week, with his tail between his legs, Hoffman deleted the post. He then apologized to his fellow PAC members during the meeting. Hoffman is not yet committed to next week’s Honda Classic, but that is where more eeriness is bound to ensue.

The Tour will host a mandatory attendance meeting for all players in the Honda Classic field, scheduled for Tuesday evening at PGA National. It’s not entirely without precedent, as this happened back in 2019 as well, with then-new USGA Rules as a primary subject. Another annual meeting took place in 2020 at Torrey Pines, this time with the Premier Golf League being discussed. Commissioner Jay Monahan told players back then they would have to choose between one league or the other. This week, that suddenly feels like prophesy. Monahan was in Los Angeles this week, playing in the pro-am and meeting with the PAC, reiterating his stance that if players jump to the Saudi-backed league, they will be banned from competing on the PGA Tour.

Next week’s meeting will set the stage for the rest of March, when some of the biggest events in the spring will take place in Florida. Tour members will be informed about what the PAC discussed this week — if they haven’t already read about it — which includes a new fall series of team-oriented events, according to GolfChannel.com.

If they don’t know where they stand right now, players certainly will next week. Many players have been approached by rival tours, and it’s no longer taboo to mention it. Likewise, some surprising figures haven’t. This week’s wildly popular defending champion, Max Homa, said Wednesday, “This stuff’s crazy. I, for one, have not signed an NDA, nor have I talked to anybody who would offer me an NDA.” Max, the craziness is just beginning. Less than three weeks from now, in the PGA Tour’s backyard at the Players Championship, the names of 20 players who have committed to the Saudi-backed league will reportedly be made public.

Agree? Disagree? Feel free to lob praise, critiques or any commentary to the author at sean.zak@golf.com.