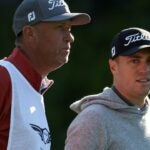 Justin Thomas shot 4-under 67 at Riviera on Thursday.

PACIFIC PALISADES, Calif. — With actual golf underway at the Genesis Invitational, Thursday seemed like it might be the day the collective golf public shifted from breakaway tour speculation to the on-course action at Riviera.

Phil Mickelson’s latest comments on the long-rumored Saudi-backed rival golf league reignited the conversation around it. Alan Shipnuck of the Firepit Collective relayed a phone conversation he’d had with Mickelson last November in which Lefty painted himself as a key architect in the proposed league — and added that he hoped the plan would generate leverage in future negotiations with the PGA Tour.

The tournament looked every bit like its usual self; pros meandered down Riviera’s sun-splashed fairways, plotting their way around one of the most challenging courses on Tour. But murmurs of Mickelson’s remarks made their way through the crowd. The modern PGA Tour fan is plugged in, and a power struggle among Tour stars makes for compelling palace intrigue. On a slow Thursday, there’s plenty of time for speculation.

Coming off a round of four-under 67, Justin Thomas — himself a PGA Tour loyalist — was asked if he’d seen Mickelson’s remarks. Understandably, he had not, though he wasn’t surprised Lefty had made news.

“Shocking, never would have guessed,” he said, a verbal eye-roll. When a reporter explained the gist of the article, Thomas let it fly.

“Seems like a bit of a pretty, you know, egotistical statement,” he added. “I don’t know, it’s like, he’s done a lot of great things for the PGA Tour, he’s a big reason it is where it is, but him and others that are very adamant about that [league], if they’re that passionate, go ahead. I don’t think anybody’s stopping them.”

Asked if it was time for players to pick a side and move on, Thomas said he was well past that point.

“I’ve heard way too much talk about a lot of players that are ‘so done with everything,’ but they keep hanging around, so clearly they’re not too done.”

If Mickelson’s remarks were the latest reminder that this is all just getting started, Thomas’ remarks served to remind that players are already sick of talking about it. Those pros who have made their stances clear, like Rory McIlroy, and Jon Rahm, feel they have little left to add.

“I am officially declaring, let’s say, my affiliation to the PGA Tour,” Jon Rahm said, aiming to end further questions on the subject.

“I’m all for the PGA Tour,” Collin Morikawa said.

“I’m so sick of it,” McIlroy said on Wednesday, slipping in a dig about the “not-so-Super League.” He also referenced the wave of top pros who have declared their allegiance to the PGA Tour, a list which includes the three top-ranked players in the world, Rahm, Morikawa and Patrick Cantlay, plus Thomas, Spieth, McIlroy and others. “You’ve got the top players in the world who are saying ‘no,’ so that has to tell you something.”

Max Homa added a particularly compelling rebuke of the league, though he admitted he hadn’t been approached to join them.

“Money makes me comfortable, it hasn’t made me happy,” he said. “When I come to an event like this, it even puts more perspective on how much I enjoy playing on the PGA Tour.”

By contrast, those pros who are considering the leap to a new league have been less outspoken, citing ongoing discussions and NDAs.

“Like everyone else, we’re sworn to secrecy,” said Adam Scott, who called the tour’s proposed schedule “very appealing.”

As a result, news comes via rumors or one-off conversations, like those Mickelson has had with Shipnuck and Golf Digest’s John Huggan. The former added particularly juicy context to the architecture of the new league, as Mickelson divulged that he was well aware of the Saudi government’s human rights abuses but saw opportunity nonetheless.

“Knowing all of this [about the Saudi government], why would I even consider it? Because this is a once-in-a-lifetime opportunity to reshape how the PGA Tour operates,” he told Shipnuck. “They’ve been able to get by with manipulative, coercive, strong-arm tactics because we, the players, had no recourse.”

Mickelson hasn’t addressed the interview, nor has he played a PGA Tour event since his trip to the Saudi International.

At Riviera, even as the tournament continues, the chatter does too.