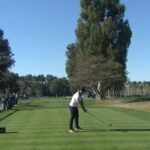 Viktor Hovland on Friday ahead of his tee shot on the 15th hole at Riviera Country Club.

The scorecard reads pars, so, in the end, the route to get there was really neither a success, nor a failure, but just a couple of fours. But oh, the place where Viktor Hovland’s ball went after his tee shots on the 15th at Riviera.

How best to describe the play that saw the young star turn his entire body to about a 1 o’clock angle on the tee box during the first and second rounds of the Genesis Invitational? Advantageous? Perhaps, and that was his thinking — the 15th played as the tournament’s hardest hole on Thursday, with a tree-lined driving window, and fairway bunkers to the left, and by taking it down the adjacent 17th fairway, Hovland opened things up a bit. Of course, knowing that the only time a player’s ball usually ends up that way is through an unintentional hook or slice made Hovland’s plan of attack seem, well, strange.

And when Hovland hit right of the 17th fairway on Friday, it seemed even more so. Consider: His playing partners were not only more than 150 or so yards to the left of him on their second shots, they were also closer — Hovland was 175 out, while Rory McIlroy was 156 and Hideki Matsuyama 137.

“It takes some courage to take a crazy line like that,” analyst Mark Wilson, also a former player, said on the PGA Tour Live broadcast. “And when you do it, you better pull it off. And if you go ahead and hit it farther to the side of the dogleg than you were intending to, wow, it can be a mess. And then you got to say hi to some other groups that come through. Just could be awkward.”

“Really not an advantage at all unless he just really hates the tee shot here on 15, but I don’t understand why with his ball shape — that he likes to fade it a little bit left to right — all he has to do is, even if he hits it in the left-hand rough, he actually has a decent angle to this hole location today,” analyst Daniel Chopra, also a former player, said on the broadcast. “So I really am struggling to understand the logic behind this play. And like I said, I just don’t think there’s going to be another player in the field who’s going to go that route today because it doesn’t make the hole any shorter. If anything, it makes it a good 20 yards longer by playing it down 17. All you’re getting is a better angle to a left hole location.”

From there, Hovland navigated his ball onto the green, dropping it over the pin, and two-putted for par. On Thursday, he hit the fairway — the 17th fairway — hit his second shot short of the green, chipped on and one-putted. Notable, too, during the first round was Thomas Pieters and Aaron Wise also played 15 via 17.

“That is weird. I’ve never seen anyone go — I mean, it’s an adjacent fairway,” analyst Frank Nobilo said on the Golf Channel broadcast.

“I talked to the marshal that’s marshaling the landing area for 17, and he said that Hovland was the third player today that’s done that. And I’ve never seen it,” analyst Curt Byrum said.

Hovland’s thinking? After his round on Friday, Hovland said he also went right on 15 during the 2017 U.S. Amateur, the move takes away some trouble and it “just fits my eye.” When it hits the fairway.

Of course, the unconventional is nothing new in golf, and it also brought to mind a similar play from Lon Hinkle, who, on the 8th hole at Inverness at the 1979 U.S. Open, hit his tee shot left and onto the nearby 17th fairway, on his way to making birdie. Memorably, the USGA planted a tree on 8 to try to block the shot, though Hinkle tried it again.

And the tree was named the “Hinkle Tree” going forward. (In 2020, it was uprooted by a storm.)

“I wonder if we’ll see a Viktor Hovland tree erected here to the right of 15th tee going into the weekend,” Wilson said on PGA Tour Live.

“I don’t think they’re going to worry about it after the shot that Hovland hit,” announcer Lisa Cornwell said.