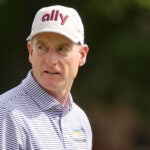 Jim Furyk at the Sony Open in Hawaii this week.

Records, they say, are made to be broken, but in men’s professional golf, at least a few marks appear insurmountable: Byron Nelson’s 11 consecutive wins; Tiger Woods’ 142 straight starts without a missed cut; and, yes, the holy grail of golf records: Jack Nicklaus’ 18 major wins. With Tiger’s superhuman powers fading, feels like you could carve all of those numbers in stone.

But there’s another less frequently cited achievement that 17-time PGA Tour winner and shrewd golf observer Jim Furyk says is also bound to go unbroken — that is, unless one player does it soon: Hale Irwin’s career win haul on the PGA Tour Champions.

From 1995 to 2007, Irwin won a staggering 45 times on the senior circuit, including a nine-win season in 1997. That averages out to nearly four wins a year over a 12-year stretch, which sounds maybe slightly gettable until you realize that Irwin was 62 at the end of that run. That’s the thing with Champions tour golf — with each passing season, you’re not getting any younger out there.

Unless, of course, you happen to be Bernhard Langer, who has aged like a fine Gruyere. In 15 seasons on the Champions tour, Langer has won with Irwinian consistency, racking up 42 wins. As recently as a couple of years ago, it seemed a foregone conclusion that Langer would eclipse Irwin’s mark. But today, not so much.

Since picking up W No. 40 at the 2019 Senior Open Championship, Langer has showed he is, in fact, human: winning “just” twice more. He’s 64 now. How many more wins does he have in the tank, especially with young’uns like Phil Mickelson and Padraig Harrington coming onto the scene? Three or four more victories suddenly seems like a big ask.

But back to the 51-year-old Furyk, himself a three-time winner on the Champions tour. Whoever ends up holding the win record, Furyk believes, that player will hold the mark forever. (Third on the all-time wins list, by the way, is Lee Trevino with 29.)

“What he and Hale did, I’m going to say now, is not going to be repeated,” Furyk said on Thursday after firing a first-round 62 on the PGA Tour to take the lead at the Sony Open in Hawaii. “There’s no way folks are going to win that many tournaments on that tour.”

The next closest pursuers among active Champions players are Fred Couples, with 13 wins, and Tom Lehman, with 12 titles. Both players are 62, meaning neither is a threat to even sniff 45 wins. Mickelson burst onto the tour last year, winning four of six starts. Does he have 42 more victories in him? Hard to imagine the Champions tour keeping Lefty’s attention for that long.

So, yes, Furyk’s Bernhard-or-bust prediction appears to have much merit.

“I’m tired of gushing about Bernhard,” Furyk added Thursday. “It’s amazing what he’s done at 64, to stay that competitive, that fit and to actually have the want and the will and the grind to be that competitive is absolutely amazing.”