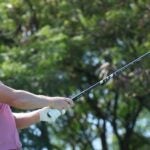 Cameron Smith hits his drive on Sunday on the 6th hole on the Plantation Course at Kapalua.

A reporter, after Cameron Smith’s victory on Sunday at the Tournament of Champions, described him this way to begin a question on the Aussie’s personality: “the everyman if you will, for the Americans, or just the solid true-blue bloke that you’ve been able to maintain.” He wasn’t wrong. Consider, first, Smith’s answer to the question, which was whether he would ever consider changing after besting 37 other winners from last year, shooting a record 34-under in doing so and moving into the top 10 in the world afterward:

“Yeah, I feel like there’s no real reason to change my personality. I think my dad would whip me, to be honest, if I did.” Smith laughed, then continued.

“I don’t know. It’s just how I’ve been brought up. I’ve been brought up to be kind of the modest guy that respects everyone. And like even today out there, Jon [Rahm] was great as well. Every time we made a putt or a birdie it was, good shot, mate, or there was never any, I guess, hatred towards each other just because we were competing. It was, we wanted to win because we wanted to compete against the best.

“Yeah, so I think that’s just kind of how I’ve been brought up, and I respect other guys’ good play as well.”

Consider, too, in evaluating his “true-blue bloke” credentials, his answer to whether he would get himself anything “as a reward for winning.”

“I don’t know. I’ll have to sleep on that one, to be honest. I mean, I’m quite content with where I’m at. I know mom’s car’s probably getting four or five years old, so maybe a new car for mom.”

You get the point, and we don’t even need to touch the business-in-the-front, party-in-the-back ‘do on the top of his head. So it was only natural then, when it was time to iron out what he believed was the part of his game that was holding him back, that he took a very much everyman method to it.

“Yeah, I don’t typically like working on stuff through the season,” Smith said. “I like to make subtle changes here and there. But I think just actually hitting golf balls, I spoke to my coach a lot over the offseason, sent him a lot of swings, and, yeah, it’s just something that we kind of grinded on.

“My irons I’ve always felt kind of comfortable with, and my wedges, and we knew that if I could finally sort out the driver that I could really have one of my best seasons yet.”

Was there anything specific Smith looked at?

“I mean, that’s hard to explain, to be honest. It really wasn’t much,” Smith said. “Probably just hitting more balls with driver, to be honest. I’m one of the — I’m not lazy. I guess I’m lazy on the range. I get through the wedges and the irons, and then I’m like, oh, I’m ready to go home and I barely hit driver. So I made sure I stayed there for an extra 10 or 15 minutes and actually hit some balls.”

And there you have it. Perhaps the most everyman way to improve: just hit more balls. And perhaps the envy of everyman who struggles to improve: just hit more balls. Still, unless the practice-make-perfect folks have been lying to us all these years, there is something to it. Especially if you blend in technique, which Smith also did, through the advice of his longtime swing coach, Grant Field. (For you, we suggest these pages.)

Whatever the case, it worked: Smith was first in the field at the Tournament of Champions in SG: Off the Tee. The everyman was the best man.

“I was really pleased with my driver all week,” Smith said. “I felt like last year it let me down a lot, so to be able to hit so many fairways, especially under pressure, was really good.”