‘We’re going to shoot nothing’: Justin Thomas dishes on records, why players are scoring 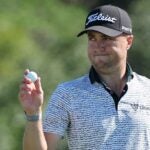 Justin Thomas on Saturday after finishing his 12-under 61 on the Plantation Course at Kapalua.

First, the news. Justin Thomas, two days after playing the first nine holes at the Tournament of Champions at two-over par, played all 18 of ’em on Saturday at 12-under. That’s a 61 on the Plantation Course at Kapalua. That makes him, after opening with rounds of 74 and 67, the sixth player over the past 10 PGA Tour seasons to improve by six shots over rounds two and three, according to stats guru Justin Ray. That’s a course record.

“If there’s such a thing as an easy 12-under, I definitely felt like it was,” Thomas said.

Now, the entertainment. After shooting that easy 12-under, and making eight birdies and two eagles, and racing up the leaderboard, Thomas wasn’t done performing. Course records will do that to ya.

In an enlightening exchange with reporters afterward, Thomas dished on his very first record. And the 15-time major winner’s mark he broke. And what it means to go lower than anyone ever has. And just why players are going so low. (Also Saturday, Jon Rahm matched Thomas’ 61, and Matt Jones shot a 62. And Rahm and Cameron Smith are tied for the lead — at a whopping 27-under.)

With that, take it away, JT.

Question: Do you remember the first time you ever set a course record?

Thomas: Yes. A Junior World practice round. I can’t remember the name of the golf course. It was — I was like probably 9 years old. It was like an executive course.

Thomas: Yeah. I don’t know. It was, but I just remember because Tiger [Woods] had the course record, and I remember beating him, and it was like the coolest thing obviously I had ever done at that time. Something tells me it’s not still standing. But I know I was — that was the first one I had ever broken, and I was pretty pumped about that.

Question: In recent years, have you mentioned that to him at all?

Thomas: I haven’t because it’s just, he’s going to say something back like and make me feel about this big, so …

Question: Do they mean something to you anymore?

Question: On both Tour stops in Hawaii now, I suppose. [Thomas also holds the low mark at the Sony Open.]

Thomas: Yeah. Yeah. I was trying to do it again today, but no, it, yeah, I mean, it’s a huge, I mean, it’s fun. Every golf course you go to, I mean, there’s a scorecard in the locker room. I mean, it’s pretty fun having a handful of buddies that live in Chicago that will go play Medinah every once in a while and they will send me pictures of my scorecard. It’s stuff like that, whether the people know me or not, or whether they know whoever shot the course record or not, it seems like that’s kind of a part of the club at that time. So it definitely means something.

Question: Have you ever gone to an, I don’t know how much recreational golf you play, gone to a course and found out what the course record was and make sure you didn’t break it just so, just to let the poor stiff keep his mark?

Thomas: No, I’m too competitive for that. To be perfectly honest, I don’t care about some stiff. I would much rather beat ’em.

Question: And lastly, we understand the conditions, which are about as perfect as it gets, and you guys are very good players, but is there a point or has there been a point recently where golf fans should just accept the fact that scores are coming down over the years?

Thomas: I think they, golf fans just need to understand what causes scores. I think everybody, they just see, oh, they’re hitting it so far now, that’s why it’s so low. It’s like no, it’s so low because it’s so soft and if you give us soft conditions, fairways this big, course this short, we’re going to shoot nothing. Then if you give us not very much wind, we’re going to shoot even lower. So you look at a place like Pebble Beach. Pebble Beach is 68 or 6,900 yards and when it gets firm, it’s all you want. But you give us a place, what, Erin Hills was a bazillion yards and it was soft, and Brooks [Koepka] shot 16-under.

Thomas: I wouldn’t think so. I remember, I love watching the U.S. Open just for the carnage and seeing the tough conditions, but at the end of the day, a lot of it, there’s nothing you can do about the weather, but it’s course setup. You’re going to get certain parts of the country where you’re able to get a little firmer, a little faster and those scores are going to be higher because of that kind of thing.