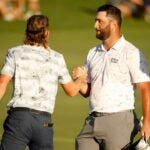 Cameron Smith, left, and Jon Rahm on Saturday after their third round at the Tournament of Champions.

Before we get into all of the fireworks on Saturday, and 38 winners from the past year on the PGA Tour lit up the Plantation Course at Kapalua like the Fourth of July, let’s have some with it. Consider Viktor Hovland. He shot an otherwise respectable even-par 73 — and sunk 10 spots down the leaderboard. Consider Justin Thomas. He shot an other-worldy, not to mention a course-record, 12-under 61, and he’s nine shots out of the lead. Consider Cameron Smith. He shot a ridiculous nine-under 64, and he lost his three-stroke lead entering the day. And consider Jon Rahm. He lost his ball on the 4th hole, took a penalty stroke — and finished with the second (!) 61 of the day to tie Smith at the top. Whew. Here are three things you need to know after the third round of the Tournament of Champions in Hawaii.

Jon Rahm and Cameron Smith are tied at the top

Let’s start with Rahm and Smith, the final pairing on Saturday (and the last one, again, on Sunday). It was a doozy.

One bogey between them. And 20 birdies. Rahm tossed in an eagle. Their fantastic back-and-forth picked up steam on the 7th, where each birdied. Rahm birdied 8. Each birdied 9. Making the turn, they each birdied 10 and 11, with the latter hole featuring a Smith putt of 20 feet, which was matched by a Rahm putt of 15. Smith birdied 14, 15, 16 and 17. Rahm birdied 14, 16 and 17 — and eagled 15. On the 17th, they dropped consecutive 28-foot putts. On 18, Rahm birdied for the 61, Smith parred for the 64, and they’ll enter Sunday at 26-under and five shots clear of Daniel Berger, and six in front of Matt Jones, Sungjae Im and Patrick Cantlay.

Said Rahm: “We were both even-par through 4, and a combined, was it 21-under par between the two of us in the last 14 holes? Well, it’s golf, and it’s this golf course, right? The first few holes are birdieable, but you come out the gates, it’s almost like a little bit of a warmup, and then you get to 5, and with a good tee shot, it’s reachable and very accessible, actually. I hit a 9-iron today and yesterday. So it kind of gets you going. You get on the birdie train, and things like today can happen. It’s the second 61 of the day, and it looks like the 35th nine-under of the week as well, right?

“So it’s definitely a doable golf course, but you still have to hit the shots, and come tomorrow, we got to keep doing the same thing. We had a fun battle today, and I’m guessing tomorrow’s going to be more of the same. We’re going to need a lot of birdies to get ahead and get the win.”

A looks at the scoring

Among the scoring tidbits from Saturday:

— Rahm’s and Smith’s 26-under total missed the lowest opening 54-hole score in relation to par in PGA Tour history by a stroke. Patrick Reed was at 27-under in 2014.

— Rahm and Thomas set the course record with a 12-under 61. Jones nearly matched it, with a 62. In all, according to the PGA Tour, the 38 players combined for an average score of 67.7, the lowest at Kapalua since the Tournament of Champions moved to the course in 1999. The previous record was 67.8 — set the day before.

— Thomas, according to stats guru Justin Ray, became the sixth player over the past 10 PGA Tour seasons to improve his score by six shots in both rounds two and three. He opened with a 74 and shot a 67 on Friday.

— Unless something funky happens, someone will likely set the 72-hole scoring record in relation. Ernie Els holds the mark, with a 31-under total at the Tournament of Champions in 2003.

Why are the players going so slow?

Good question. It’s part skill, part luck, part equipment, part no wind, part lots of rain ahead of the event. Part a lot of things. Thomas summed it all up well.

“I think they, golf fans just need to understand what causes scores,” he said. “I think everybody, they just see, oh, they’re hitting it so far now, that’s why it’s so low. It’s like no, it’s so low because it’s so soft and if you give us soft conditions, fairways this big, course this short, we’re going to shoot nothing. Then if you give us not very much wind, we’re going to shoot even lower. So you look at a place like Pebble Beach. Pebble Beach is 68 or 6,900 yards and when it gets firm, it’s all you want. But you give us a place, what, Erin Hills was a bazillion yards and it was soft, and Brooks [Koepka] shot 16-under.”