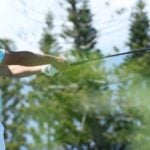 Bryson DeChambeau hits his tee shot on Thursday on the 9th hole on the Plantation Course at Kapalua.

Bryson DeChambeau, during the November Masters of 2020, admitted to feeling “something a little weird.” He shot rounds of 70, 74, 69 and 73 and tied for 34th, but on Sunday afternoon, he was concerned.

“I’ve got to fix whatever is going on up here,” he said at the time. “I have no idea. Just dizziness. It’s only when I go from down to up, so I can’t even, like, think and talk right now. But that’s just what happens — I go down and up, and my brain gets all disoriented. I’ve got to fix that, and once I fix it, I’ll be even better than now. And when something arises in the future, I’ll just keep trying to fix it.”

Turns out, that was one problem with swinging, as analyst and swing coach Mark Immelman described it, with “violence.”

In a sport where contact is rare, DeChambeau had hurt himself in a manner more associated with football and soccer.

“Funny enough, I gave myself a concussion,” DeChambeau said on a recent episode of Immelman’s podcast, On the Mark.

“I thought it might have been diet,” Immelman said.

“You got to slow those speed journeys down, Bryson,” Immelman said.

Indeed. When the PGA Tour returned from its three-month hiatus in June of 2020, and DeChambeau returned with some 30 extra pounds in an effort to gain somewhere around that number in yardage, he had also embraced a swing-faster mentality. Until he eventually didn’t. Or, now, just over a year later, at least not as much so. One, he was hurting himself.

And two, he was also hurting what he was originally after. In an insightful exchange between him and Immelman (and the entire podcast is well worth a listen here), DeChambeau said his work with Kyle Berkshire and others of Long Drive fame last year revealed that “it’s not about how fast you swing the golf club” to create more speed.

“So like during the November Masters, I was just swinging as fast as I could. Back and forth, quick as I can,” DeChambeau said. “So from the time to start to impact was super fast. Doesn’t mean I’m going to swing fast. … In order to create the most velocity at a certain point in time, you have to have time to accelerate. And distance.”

“Like Talladega versus Bristol Speedways,” Immelman said, referring to the longest NASCAR track, and one of the shortest.

“So what I was doing was just try to swing as fast as possible to get it to go as far. Well, that caused a concussion. It’s obviously not the right route to go. So don’t try and swing fast when you’re hitting it hard. In order to hit it farther, in order to have a faster ball speed, a faster clubhead speed, at the right moment in time, that is the key. You don’t need to accelerate the club really fast. You need to have the speed down right through impact. So in order to produce more speed through the ball, you have to take a longer, softer, wider swing. And if you can do that, and load the wrists, and then unload it, and stay tall through impact — don’t shrink down, because that increases the lever length and you can rip the club a lot faster — you’ll produce more speed in the golf swing. And that’s what I started to realize after watching Kyle.

Of course, one “fix” has led to another problem.

“Meanwhile, I’m still working on the wedging,” DeChambeau said. “So it’s crazy, I got to learn how to accelerate really quickly and slow it down and then I got to go hit a wedge shot where there’s barely any acceleration. That’s the trick.”

“Yeah, that little offspeed delivery, that reduce the spin one,” Immelman said

“If you can learn those two shots, you’ll be the best golfer in the world,” DeChambeau said.