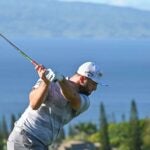 Jon Rahm hits a shot at the 2022 Sentry Tournament of Champions.

The second round of the 2022 Sentry Tournament of Champions gets underway Friday, January 7, at Kapalua in Hawaii. You can find full Round 2 tee times for the tournament at the bottom of this post.

Featured pairing for Tournament of Champions Round 2

All eyes were on Jon Rahm on Thursday, as the reigning World No. 1 made his first PGA Tour start since the Fortinet Championship in September, where he missed the cut.

The long break apparently did him good, as the 27-year-old fired an opening round of 66 — seven under par. His flawless lap at the Plantation Course included seven birdies and zero bogeys. Who said anything about rust?

Rahm’s score was good enough for T2 after one round, one shot behind leader Cameron Smith at eight under.

Rahm will play the second round alongside Patrick Cantlay in the penultimate pairing on Friday, beginning at 5:35 p.m. ET.

Check out complete second-round tee times for the 2022 Sentry Tournament of Champions below.

2022 Tournament of Champions Round 2 tee times (All times ET)

How to bet on the Tournament of Champions

Looking to make a (legal!) wager yourself? We teamed with BetMGM, and the online sportsbook is offering a “Risk-Free Bet” up to $1000 promotion. Sign up for an account to get into the action today.