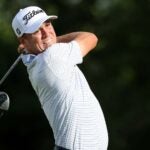 Justin Thomas is teeing it up at the Sentry Tournament of Champions this week.

Some of the game’s biggest stars are back in action at the Sentry Tournament of Champions, which means it was their turn to chime in one of the sport’s biggest storylines from the past year and one to watch in 2022: the creation of a Saudi-backed league with big paydays for the game’s elite.

“I think if the idea of other competition and other tours or whatever happening, I think it’s a good opportunity for the Tour to kind of maybe sit back and us players sit back to realize what can we do better on our Tour and then make our product better, versus having two competing tours to me is not good because you’re diluting the product on both sides and it’s just not, you’re not going to get the best — it’s not possible to get the best players in the world on both tours,” Justin Thomas said. “They’re either going to be one or the other or a little bit of both.”

In October, Greg Norman was named CEO of the new Saudi-funded LIV Golf Investments, which has elevated the Asian Tour and will back a series of 10 of its events over the next decade. It’s not much of a secret though — anymore, at least — that a major goal is to lure the game’s stars for lucrative team and individual events down the road.

The Asian Tour has already announced marquee names such as Dustin Johnson, Phil Mickelson, Bryson DeChambeau, Sergio Garcia, Xander Schauffele and Matthew Wolff to headline its Saudi International in February, which will be the Asian Tour’s strongest tournament field to date. It’s also Pebble Beach week on the PGA Tour, and players had to apply for releases to enter the Saudi International.

“I think as a player, overall, it will benefit in that I think that the changes that have come from the PGA Tour have been modernized in a way that may or may not have come about if [the threat of other leagues] weren’t there,” Jordan Spieth said. “So I think for us players on the PGA Tour, I think that so far it’s been something that has kind of helped the PGA Tour sit and say, hey, where can we look to satisfy our membership and potentially make some changes going forward where there’s some similarities potentially to a league like that, but while maintaining kind of the integrity, the 501(C)(6) category that the PGA Tour has.”

Spieth was obviously referring to the new Player Impact Program and increased prize funds and bonuses. The DP World Tour, which is the rebranded European Tour, has also increased its overall purse money for 2022 roughly twice as much as last year.

“I guess we’ll have to see,” Spieth said. “… I can only say from my point of view I think that it’s been beneficial to the players to have competition, and I think the Tour would say that they probably feel that they’re in a better position going forward by having to sit back and kind of take a look at things and make some changes.”