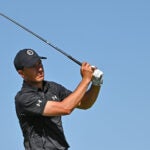 Jordan Spieth is playing the Tournament of Champions for the first time in four years.

For Jordan Spieth, his return to Kapalua has been a long time in the making.

He hasn’t played this event in four years for one simple reason: he wasn’t winning. The annual Tournament of Champions is exactly that: a tournament for champions. If you won on the PGA Tour in 2021, you are invited to celebrate that victory all over again with everyone else at the first event of 2022. Spieth’s last win before his April 2021 triumph came at the 2017 British Open.

His nearly four-year drought has been covered exhaustively, but what hasn’t been clear is just what he was thinking about during it. Spieth clarified some of the mystery last year when he won, and even more of it Tuesday during his pre-tournament press conference.

“I could actually pinpoint an exact timeframe where I thought, ‘Wow, things seem to be getting off and I’m not really sure how to fix it,’” Spieth said. “And then there was just years of — a couple years of just misdirection, I think.

“And then I can also pinpoint the exact timeframe where I really felt like I started to turn around and go the right direction.”

When you glance at his performances, you’d guess it took place around this time last year, or perhaps the end of 2020. Spieth missed his first cut of 2021, but then stormed back into contention at the Waste Management Phoenix Open. You might remember it well, his 61 on Saturday at TPC Scottsdale. He followed that with top 10s at Pebble Beach, Bay Hill and the Match Play before finally winning at the Valero Texas Open. So, what was his salve?

It’s the same fix he’s continually trying to make right now. “I’m honestly just trying to get back to my DNA,” Spieth said. “I got away from that and I was swinging in front of my body and just … I’m really just kind of looking back to my DNA from high school, college, into the first few years on Tour, and really just trying to map stuff to there, recognizing that your body changes and not everything’s going to overlap.

“But as far as the big components, really being able to get through the ball, committed threw the ball, get my body working better where your body’s hitting it and you’re not relying as much on your hands. It’s really hard to play on the PGA Tour trying to rely on timing and it’s very hard to stay consistent for four rounds.”

Spieth knows that as well as anyone. For a while his bugaboo was, simply, Saturdays. He could play well through two rounds, insert himself into contention even, but the train would careen off the tracks during the third round. It seemed to make no sense, but it happened on repeat. So much that he finished the 2020 season ranked 165th in third-round scoring. Was it an example of him relying too much on his hands, and eventually things feeling different during contention? It’s a plausible explanation. But at some point, Spieth was able to get back to some feelings he had and confidence he had built up during high school. It paid off during third rounds, and eventually during fourth rounds, too.

“Last year I saw myself play a lot of tournaments where I was very consistent for four rounds — and a lot of times it wasn’t with great putting,” he said. “Sometimes it was. I think that those were steps in the right direction that just continued to build confidence.”

It will be interesting to see if Spieth picks up right where he left off in 2021. He and his wife Annie had their first baby, a boy named Sammy, in November. The timing of golf’s tiny off-season matched up well for him to spend more time at home than he might have during any other golf month. He’s thrilled more than anything to be playing Kapalua again. Not sitting down at home in Texas to watch the event on his TV, like he was a year ago.