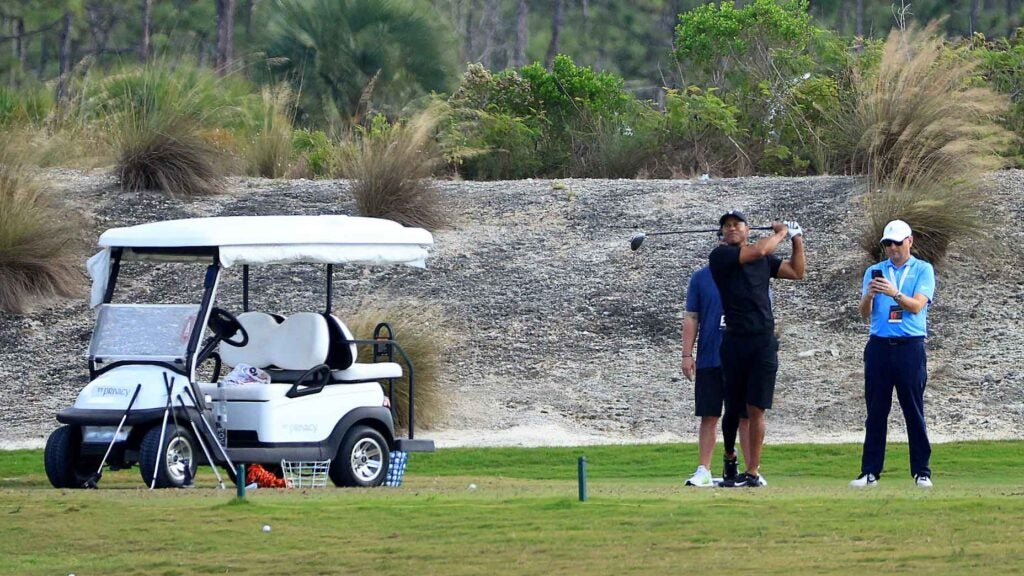 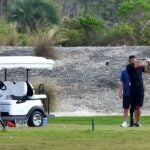 Tiger Woods on the range on Saturday at the Albany Golf Course.

Tiger Woods is hitting driver. Two weeks after sharing on social media that he can hit a wedge, and a few days after he was seen hitting a fairway metal on the range at the Albany Golf Course, and some nine months after his car crash, the 15-time major champion had graduated to the club that can require the most twists and turns, those on site at the Hero World Challenge were both seeing and socially sharing. Woods himself on Saturday even said he was.

In a more than half-hour interview during NBC’s broadcast of the third round of the event Woods hosts, he shared his thoughts on Lee Elder, what he texted the U.S. Ryder Cup team and whom Collin Morikawa reminds him of, among other topics. Woods also repeated much of what he said in interviews earlier in the week, where he said he may be hitting drivers, fairway metals and wedges, but he’s a ways away from playing Tour golf with them.

To that, this exchange is most notable.

“Does it feel like a risk when you make a swing?” analyst David Feherty asked.

“It has before, but if I go at it at what I would say like my old speed, yes, it is,” Woods said.

Below are five other highlights from Woods’ time in the NBC booth:

As Woods was asked earlier in the week, announcer Steve Sands also asked how Woods’ recovery has gone since his single-car crash in late February in the Los Angeles area.

“Yeah, I want to ask you about that,” Feherty said. “Have you had the house made wheelchair accessible yet?”

“I was only there in the wheelchair for about two weeks,” Woods said. “I have an elevator, which was nice. I was able to wheel myself in the elevator, wheel down to the gym and be able to work out.”

“So you didn’t need a nurse or anything?” Feherty said.

What did Woods text the U.S. Ryder Cup team?

During the United States’ victory in late September at the Ryder Cup, players and captain Steve Stricker shared that Woods was texting, though neither revealed what he was texting. “We had a nice message from Tiger last night, and obviously not going to reveal what it said, but Pat [Cantlay] and I know,” Xander Schauffele said on the Friday of the event. “We referred to it a few times today, and we knew what we needed to do.”

More than two months later, Woods was asked what his words were.

‘We lost one of the great heroes of the game’

On Monday, Lee Elder died, and Woods shared his thoughts on the first Black golfer to play at the Masters.

“Since Charlie [Sifford] was denied access to the tournament, even though he qualified, Lee was the first one to break the color barrier at the Masters,” Woods said, “and for him to endure what he had to endure week in and week out, and especially that week, all the threats, moving to different homes — it was a different era and different time — for him to go out there, the courage it took for him to get out there and play and the dignity that he played with and the way he held himself throughout all these years — he was never a bitter man, very humble. We lost one of the great heroes of the game.”

Whom does Collin Morikawa remind him of?

Morikawa is leading the Hero after three rounds, and he could become the world No. 1 with a victory. On a shot, analyst John Wood said to Woods: “I wouldn’t put many guys in your class in terms of golf intelligence and working your way around the golf course. This guy is one of the few I might put up there with you.”

“He reminds me — I don’t want to sound insulting in a way, but he plays like an athletic Jim Furyk,” Woods said. “Don’t take that in a wrong way, Jim. I’m sorry if you’re watching. He’s longer, but he thinks himself around the golf course methodically like that. And has the power. He has more power than Jim did. But he thinks and plods his way along. Look at all of his misses — they’re always on the correct side. And with that iron game and enough distance off the tee and he’s figured out how to putt a little bit better, there’s no reason why he can’t win — he’s already won two — but he’s going to win more majors and more tournaments.”

Playing with son Charlie at the PNC Championship in two weeks?

As GOLF’s Dylan Dethier reported, Woods is seriously considering playing alongside son Charlie in two weeks at the parent-child PNC Championship, where play is 36 holes, the format is scramble and carts are available. Woods was asked by Sands: “Whether it’s the PNC Championship with Charlie, whether it’s the Genesis at Riviera, your tournament, the Masters, the Open at St. Andrews, when will you know, how will you know if you’re ready to come back and compete in front of cameras and people?”

“That’s a great question,” Woods said. “As I was saying in the press conference on Tuesday, playing hit-and-giggle golf, it’s easy. You can slap it around, hop in a cart and do whatever. Play nine holes, six holes, pick up, whatever, hit a bad shot, eh, I’ll hit another one, no big deal. But playing Tour golf and being prepared to play and try and shoot scores against the best players on the toughest golf courses then that’s a totally different deal. And I am a long way away from that. And so don’t expect me to be out there at the Tour level for quite some time.”

Said Sands: “Now, not sure if you know this or not, but the PNC Championship is kind of a hit-and-giggle. And you can ride a golf cart and it’s a very short golf course. I don’t know if you know that or not.”

“It’s short for Charlie,” Woods said. “It’s not short for where I’m playing. I got to play back there with Justin, and I’m hitting half as far as he does.”