Brooks Koepka misses another cut, and a Masters champ has theories why 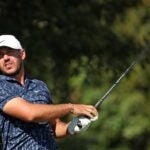 Brooks Koepka hits his tee shot on Friday on the 14th hole at Memorial Park.

Brooks Koepka, after round one last week at the World Wide Technologies Championship at Mayakoba, rolled putt after putt after putt on the practice green at El Camaleon Golf Club. A week later, after Thursday’s round one at the Houston Open, Koepka hit driver after driver after driver on the range at Memorial Park. While he once said he never practices for “regular tournaments,” only to recently backtrack, the four-time major champion was clearly searching.

“I’ve just been grinding, man,” Koepka said ahead of the Mayakoba. “You go through periods where you just feel like you’ve got no control of the clubhead or you don’t know exactly where your swing is and what you’re doing. It’s just frustrating.

“I don’t think I’m playing as bad as probably I’ve let on, but the consistency’s just not there; there’s certain shots that just aren’t there. Not what I’m used to seeing, I guess is a good way to put it.”

While watching Koepka on Friday hit his tee shot on 18 at Memorial into the left rough, Trevor Immelman said as much. The 2008 Masters champ also theorized why both he and Koepka aren’t seeing what they’re used to seeing.

“Kind of at odds with his swing,” the analyst said on the Golf Channel broadcast as he watched video of Koepka on the range. “Not quite knowing exactly where that clubhead is. … Trying to figure out and find a little something. Just way out of sync right now.

“For me, it looks like his lead arm is much higher than usual at the top of the backswing.”

Immelman was then asked what Koepka could gain from a range session. In the video, Koepka was also talking with swing coach Randy Smith, and Golf Channel’s Rex Hoggard reported that he was working with Koepka both to get more “underneath” the ball and to be more athletic at address.

“Well, when you’re that good, you’re just looking for something small and all of a sudden things can change,” Immelman said on the broadcast. “As soon as you can get a feel for where that clubhead is in your downswing and you can start to get it to kick out in front of your body at the right moment, with that clubface nice and square, then your confidence slowly but surely starts to build. When you’re somebody of that caliber, he can jump on it pretty quick.

“But struggling right now. Really has been poor ball-striking for quite some time.”

This year, Koepka won the Waste Management Open in February, his first win in 18 months, and followed up with top 10s at the PGA Championship, U.S. Open and Open Championship. But in eight events since, he’s finished no better than a tie for 22nd at the BMW Championship at the end of August, and he’s now missed two straight cuts, after rounds of 71 and 72 in Houston.

Included in that stretch, too, was a withdrawal from the Tour Championship after hitting a tree root and hurting his left wrist, the latest injury in a slew of them. Immelman said setbacks due to injury setback can lead to ones with the swing.

“Yeah, and I know exactly how that it is,” Immelman said on Golf Channel. “Once you’re struggling with injuries, all of a sudden you start to make compensation sometimes without even wanting to. And it can be a long road back if you didn’t leave bread crumbs to understand exactly how to get back to that blueprint.”

Before the Mayakoba, Koepka echoed that.

“Look at it, it’s been tough,” he said. “I mean, injuries for two years. I’ve got surgery on the right knee. Left knee’s, I mean, better now, but it wasn’t good for a while. You start making compensations because you can’t — I mean, like I still, when my knee bends a little bit, I still don’t know how far it’s bending. If everybody’s ever had surgery, you still don’t know kind of where you’re at for a bit and maybe hesitant to get on the left side when the left knee was hurting. Right knee, you’re kind of playing this yo-yo game and trying to find a balance.

“It’s been a little bit more difficult, a lot more work’s been put in. Like I said, I’m just trying to play my way through it.”