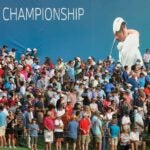 The relatively unknown Caves Valley GC, in Owings Mills, Md., was ready for its close-up when the Tour—and the 2021 BMW— came to town.

When Annika Sorenstam hoisted this year’s U.S. Senior Women’s Open trophy at Brooklawn CC in Fairfield, Conn., it marked a great comeback — for Sorenstam and the club.

Sorenstam, who turned 50 last October, was playing in her first USGA championship in 13 years, after dusting off her game during the Covid lockdown. For Brooklawn, a 1929 Tillinghast design where Gene Sarazen began his career, the wait for its fifth national championship had been longer: 18 years since it last hosted the U.S. Girl’s Junior Championship and 34 years since it last hosted a major, the 1987 U.S. Senior Open.

Getting the opportunity to host a big-time event is both easier and harder than a club might think. While the USGA has recently awarded a large number of championships to a rota of Top 100 stalwarts such as Pinehurst No. 2, Oakmont and Merion — part of the organization’s strategy to establish anchor sites for the men’s and women’s U.S. Opens — there are still plenty of national championships up for grabs, not to mention regional tournaments and maybe even a PGA Tour event for the right club.

How Brooklawn was awarded the Senior Women’s Open and what it and other host clubs have to do to pull off these events is instructive. Sure, a club needs a strong history and a challenging course to land a significant tournament, but staggering length is only needed for a U.S. Open or a Tour event. What successful host clubs do to make tournaments work is really about managing logistics, member expectations and fundraising. Rick Ryan, Brooklawn’s chairman for the U.S. Senior Women’s event, began his effort years ago by drawing up a master plan.

“I felt the need to follow some sort of guidance,” he says. “And look, we already follow a master plan for our course — otherwise, it’s put a tree here or a bush there. A plan gives some rationale as to why you’d want to host championships.”

Ryan says he made sure members were on board. He hoped that at least a third would be in favor and no more than a third would be opposed. A survey found over half were behind the idea, with only 11 percent opposed. When asked if they would volunteer their time, 64 percent of members said they would. No tournament happens without member buy-in and volunteers.

The next step is making the ask to the event’s governing body. “It starts with them raising their hand,” says Mark Hill, the USGA’s managing director for championships. “We don’t actively recruit host sites. They come to us.”

Hill says that sometimes a club’s reputation in a region draws the attention of a USGA board member, as was the case with El Caballero CC in California’s San Fernando Valley, which was awarded the U.S. Women’s Amateur Four-Ball in 2018.

Money for hosting an event ranges widely. If you’re talking about a U.S. Open, the amount the USGA pays in facility fees is substantial — north of $2 million when it “rents” a club. But clubs also share in the event’s revenue and receive additional funds to prepare and restore its course. In the past decade, Erin Hills’ total take was on the low end: $3.9 million. Oakmont was at the top end with $9.3 million, a third of it from merch sales alone. PGA Tour fees vary more. Consider the courses on California’s Monterey Peninsula. Pebble Beach can command $2 million for tournament week, while Spyglass charges around $300,000.

Getting the opportunity to host a big-time event is both easier and harder than a club might think.

Money often flows in the opposite direction for even the highest-level amateur competitions, where host clubs are asked to raise, not rake in, significant dough. Westchester CC in Rye, N.Y., a regular Tour stop for decades, hosted this year’s U.S. Women’s Amateur. The tournament, won by Jensen Castle, was the first USGA event at the club since the 1923 Women’s Amateur. When all the accounting is done, the Women’s Am will have cost Westchester somewhere between $500,000 and $700,000 — money that was raised privately.

“We got a heck of an event,” says Peter Knobloch, cochair of the tournament. “But there were definitely a group of members who were looking at us a little cross-eyed and saying, ‘Why are we funding this event?’ That’s just the way it works.”

Many clubs see hosting a high-profile tournament as part of their mission. A solid reputation in the golf world also helps members when they look to arrange tee times elsewhere.

“The thing [members] do grumble about a little bit is the need to close the course for a period of time,” says John White, president of The Philadelphia Cricket Club, host of the upcoming 2024 U.S. Amateur Four-Ball.

Philly Cricket has two courses plus a nine-holer, so members have playing options. Most clubs, like Columbia CC in Chevy Chase, Md., have just one. And there are other considerations. Columbia, which hosted this year’s U.S. Girls Junior Amateur, pumped up its staff to prep for the eight days of the tournament.

“There are clubs that host a PGA Tour event every year or a USGA championship every three to five years, so, from a staffing model, they’re prepared,” says Columbia GM Will Duthe. “We didn’t add employees, so it was about getting our staff excited about the event and the extra time they were putting into it.”

Another route to fulfill a club’s tournament mission is to host a regional golf event. There isn’t the high cost of housing, transporting and feeding the players, since they live within driving distance.

And there’s a more immediate benefit: The event allows members to show off their course to locals who might join it.

“Our data shows that access drives membership,” says Brian Mahoney, executive director of the Metropolitan Golf Association, which encompasses New York and parts of New Jersey and Connecticut. “We’re organizing events as a service back to our 500 member clubs.”

Perhaps the easiest way for a club to enjoy the benefits of hosting a major event without the heavy lifting is to be designated the cohost of a U.S. Amateur. Given the annual tournament’s unusually large number of entrants, two courses are required to narrow the field to its final 64 players. Longue Vue Club played that role for Oakmont this year, and for 2022 that spot will go to Paramus, New Jersey’s Arcola Country Club, with nearby Ridgewood CC as the main site.

“It’s the big amateur event of the year,” says Arcola president Doug Kuiken, who’s looking forward to heightening his club’s visibility. “Everyone wants to play Ridgewood, Baltusrol and Plainfield in New Jersey. We’d like to be a part of that.”